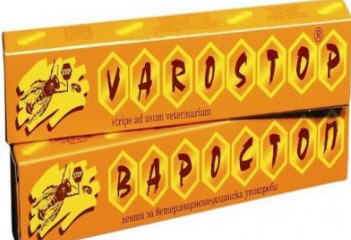 Varostop - strips against mites of Varroa

Structure: Each strip contains 3,6 mg of a flumetrin (Flumethrinum). Each packaging contains 10 strips.

Action: the synthetic pyrethroid (flumetrin) which is a part of drug Varostop has reliable contact insecticidal and acaricidal effect against causative agents of varroatosis - a tick of Varroa Jacobsoni. Differs in high acaricidal activity - to 100%. Will paralyze a nervous system of mites and considerably reduces their population. Flumetrin has the selection action against mites of Varroa Jacobsoni is exclusive and does not harm honey-bee colonies. There are no data on the acquired resistance of mites to a flumetrin.

Indications: For diagnostics, prevention and treatment of varroatosis at bees.

We recommend to see
Veterinary bee medications
Preparations for bees
Send inquiry
Buy
Contact supplier
Your question has been sent successfully
Consultants of the shop typically answer questions during the day.