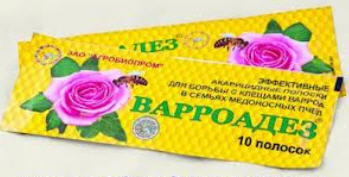 Honey-bee colonies process in the spring (after the first survey of families of bees) and during the aestivo-autumnal period (after honey pumping) by placement of strips of drug in beehives at the rate of 2 strips on 10-12 of a nested framework. For small families (to 6 frames), 1 strip which is placed in the center of a nest suffices layers and nukleus. Before use it is necessary to make an opening on one of the ends of a strip, to pass through it a hairpin and to record a strip vertically precisely on the center of the small street (in its middle part) between two frames of a bee nest. In a weak family suspend a strip between 3 and 4 sotoramkam, in strong one strip between the 3 and 4, second strip between between 7 and 8 frames. Strips leave in a family for a period of 3 till 30 days, depending on quantity of a printing brood.
Contact the seller
Varoadez | Drugs for bees

We recommend to see
Veterinary bee medications
Preparations for bees
Send inquiry
Buy
Contact supplier
Your question has been sent successfully
Consultants of the shop typically answer questions during the day.