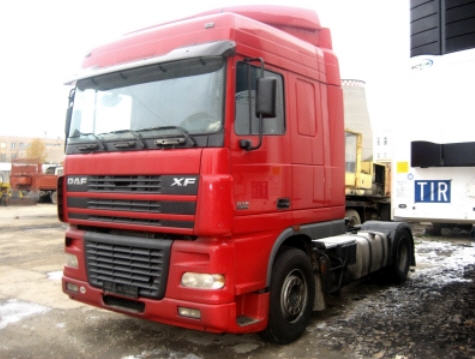 In stock
Reconfirm the price with seller
Seller
Agroholding, OOO
Ukraine, Nikolaev
(View map)
Call
Products of other enterprises
Technical characteristics
Description
On the last novelties of DAF cars the PACCAR MX motor which working volume increased to 12,9l is installed. in comparison with the previous models also vydt options of power of 360, 410, 460, 510 and 560 h.p. This engine became result of somestny work of designers of the Dutch DAF and the American corporation PACCAR. For reduction of number of details in the series MX engine engineers resorted to an innovation - they managed to unite many knots on a functional sign. A block head with four valves on the cylinder and an inlet collector are made in uniform casting. At the same time it was succeeded to leave also a camshaft in the block, and from a flywheel driving gear wheels are placed. Placed the thermostat and an oil filter for the water oil heat exchanger in one knot.

In addition in PACCAR MX the system of injection with integration into the block of cylinders is installed. And the two-level turbo-supercharging allows to consider this engine as the embodiment of all last achievements of PACCAR corporation. Toughening in Europe and around the world environmental standards for this diesel is not a barrier, it surely fits in the level of norms Euro-3. If AdBlue urea solution is in use used, then to the engine even norms of Euro-5 are not terrible.

The minimum resource of development declared by the producer makes about 1,6 million km., though at rather careful operation and timely maintenance this engine will serve much longer. Besides, as practice shows, fuel consumption within 30-36 liters allows to call this engine also rather economical.
Contact the seller
Tractors ballast with trailers. Tractors. DAF tractors