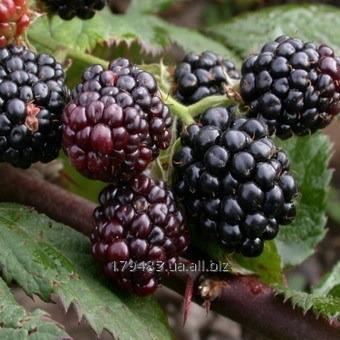 Tornfri (English "without thorns") is an agriculture with upright or creeping escapes. Elevated part — biannual, as at raspberry. In the first year young escapes on which the harvest of next year is put grow; for the second year on them there are inflorescences, berries ripen (and by winter these escapes die off, giving way to new. Rhizomes flush replacement up to 5 m high, i.e. annually the bush has a lash and the first, and second year — one grow, others fructify. Escapes are covered with large dark green leaves, crimson in the winter — very effective green hedge. During long blossoming the plant becomes covered large, to 4 cm in the diameter, by white-pink flowers, is more decorative than a jasmine, on beauty not conceding a lilac. Later, in process of maturing of fruits, color passes in red and, at last, into a black rossp of granular ripe berries.

Berries large, weighing up to 5 grams, with a diameter up to 3 cm, sweet-sour, transportable. Scheme of landing of saplings: - 2,5 m x 1,5 m that means 30 pieces on one hundred part or 3 thousand on hectare. The industrial harvest allowing to pay back the most part of costs of laying of the berry-picker can be received for the second year after landing. Fructification is dragged out from July to October. The best terms of landing — in two weeks prior to frosts in the fall or prior to active vegetation early in the spring. Form Tornfri on a lane 2,5 m high. Five the provolok is pulled through each 50 cm to which young escapes in process of their growth tie. At green cutting leave 8-10 escapes on running meter. It is noticed, the cutting of lateral branches of escape is shorter, the berry is larger.

After harvesting otplodonosivshy two years' escapes delete. From one-year clean weak, damaged. In Ukraine there are farms which are steadily gaining powerful income from hybrids of raspberry and blackberry. So, in the Crimean JSC Sady Tavridy (The Bakhchsarai area) for the fourth year after landing productivity of delicious berry made 220 c/hectare. At the average price of 8 UAH for kilogram (market 10 UAH) of 1 hectares yielded 160 thousand UAH of revenue or 80 UAH from each planted bush. And it apart from very powerful profit on realization of saplings of Tornfri. Usually environmentally friendly production goes in great demand.

Tornfri seeds, shanks, layers, but a reliable and low-cost way — layers breeds. Each prikopanny kidney of escape is an excellent sapling at the end of a vegetative season.