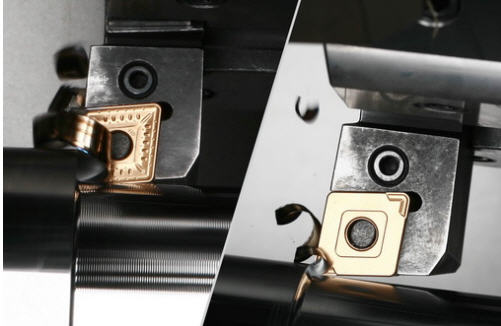 TOPDUTY - a tool series for heavy turning. Square ISO of a plate with struzhkolomayushchy geometriya of "HZ" and "HY

In stock
Reconfirm the price with seller
For example: +380(50)123-45-67
Call
TAEGUTEK UKRAINA, OOO (TaeguTec)
Ukraine, Dnipro
(View map)
+380
Display phones
12
12 years on Allbiz
Technical characteristics
Description
Plates, with the struzhkolomayushchy geometriya of "HZ" and "HY" intended for draft "obdirka" of large details entered this series. These decisions allowed to introduce the given positions in such branches of the industry as heavy mechanical engineering, shipbuilding and construction of wind-driven generators where there is a processing of big details on the high modes.

Advantages of "HY" and "HZ" of geometriya:

- stable firmness of a plate thanks to very strong edge of a plate with a negative forward corner;
- the ledge on a forward surface of a plate optimizes a struzhkodrobleniye on draft operation of turning;
- thanks to a new method of preparation of an edge, temperature in a cutting zone considerably decreased, increasing at the same time firmness of a plate;
- control of shaving and productivity of the tool are improved thanks to a possibility of this plate to carry out deep cutting of metal without decrease in giving. The best decision for heavy draft operations;
- wear resistance of the tool increases thanks to a wide choice of new types of wearproof coverings;

In 2011 the company went forward, creating economic decisions which are introduced on ISO plates with dimensions of the cutting side of 19 mm and 25 mm. On draft plates 2 types of struzhkolom are at the same time used (one plate with two struzhkoloma). The main, on one party - for roughing and fair struzhkoly on a reverse side. This economic concept of production of plates allows us to carry out one party draft operations, and another - fair, "finishing" unused edges on a plate. Besides it gives the chance to reduce the nomenclature of the cutting tool, using one plate for performance of both draft, and fair operations.

These plates are carried out with the following draft sruzhkoloma on a forward surface of plates: HD, HT, HY, HZ. Such bilateral plates are designated as CNMD and SNMD and have radius at top of 2,4 mm, and also are carried out in two most popular alloys - TT8115 and TT8125.

In the TOP DUTY series the line of standard square ISO of plates was replenished with a bilateral square of 31 mm-go of a dimension. This plate is realized with two types of struzhkolomayushchy geometriya: draft HD and HT with an opportunity to process them up to 25 mm on the party and fair about which advantages it was told above. The plate is made in three types of alloys: TT8115 - for continuous high-speed turning, TT8125 - for universal application and TT7100 - for severe conditions of processing.

Similar company products
Contact the seller
TOPDUTY - a tool series for heavy turning. Square ISO of a plate with struzhkolomayushchy geometriya of "HZ" and "HY