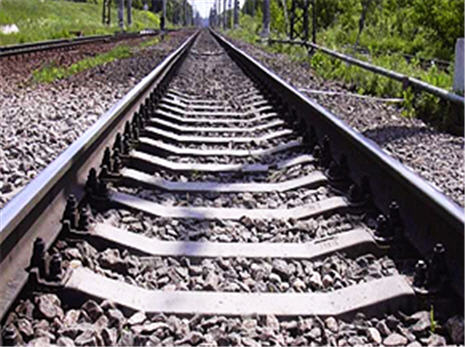 railway, crane, mine, other.

the bar is sleeper

Rails are railway, intended for link and jointless way of the railroads and for production of railroad switches, are made according to GOST P51685-2000.
Keep within on cross ties or other support for formation of way of movement of rolling stock. Feature of such way - the smallest tractive resistance, and consequently, the minimum energy costs for movement of rolling stock.

Cross ties (niderl.spalk — prop) — support for rails in the form of bars. In railway track usually keep within on track bed of upper structure of way and provide invariance of relative positioning of rail threads, perceive pressure directly from rails or from intermediate fastenings and transfer him to the subsleeper basis (usually — track bed, in the subway — concrete foundation slab).
Wooden ties have many advantages: elasticity, ease of processing, high dielectric properties, good coupling with broken stone ballast, small sensitivity to fluctuations of temperature. The major property is the possibility of gage widening in curves with a radius less than 350 m.