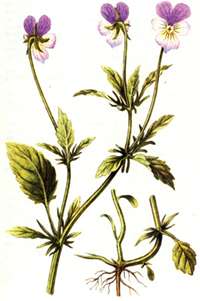 The violet is medicinal, a violet three-colored

The violet is medicinal, a violet three - colored
In the medical purposes also the violet field is used (Viola arvensis Murr. ), which is applied as well as a violet three - colored. At a violet the field upper petal usually white, is more rare light - violet, and other yellow, the nimbus is equal on length to a cup or less it. Eurysynusic weed of summer and winter crops, long - term herbs. Both violets are from Europe, but as weed plants extended on all globe.

Curative properties of a violet were known in an extreme antiquity. It is mentioned in the Roman mythology as "a flower of Jupiter". Once in hot day, the legend tells, Venus decided to bathe. Chose the remote grotto that nobody could spot, long and with pleasure bathed. And suddenly heard rustle. Turned and saw that several mortal look at it. The goddess was angry and decided to punish too curious. She appealed to Jupiter, asks death the guilty person. Floodlight heard a request, but did not count fault mortal such big and turned them into flowers on which the surprise and curiosity which led of them to death is written. In Christian mythology the three - colored violet is called a flower of the Holy Trinity. Medieval Christians saw in the dark triangular stain which is in the center of a flower, the Eye of Omniscience, and in the stains surrounding it - shine around it. Three parties of a triangle were considered as three faces of the Holy Trinity originating from the Eye of Omniscience.

Similar company products
Contact the seller
The violet is medicinal, a violet three-colored