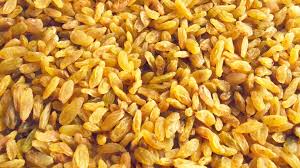 The raisin is ladies'

The main suppliers raisin and are such countries as Iran.

Raisin of ladies' 10 kg the Main suppliers of raisin are such countries as Iran.

There is a large number of grades of raisin which differ in flavoring and color qualities depending on a grade of grapes of which it is made.

The raisin represents the dried-up grapes fruits. Most often it is used as culinary additives to various dishes. And surprising feature of raisin is its combination, both in pastries, and in main courses. Culinary use of raisin was for the first time opened by inhabitants of the Middle East.

For a long time it is accepted to divide raisin into several types. In total their four.

Sweet fruits of grapes of green and white grades when drying turn into small light raisin without stones. This look has two names - culinary and trade. In the first case it is called sultana grape, and in the second - a sabza. Most often such type of raisin is used for pastries.

The second kind of raisin - the dried-up fruits of the average size possessing in the light-olive color. Such raisin contains stones. Most often it is used for preparation of various drinks including compotes, and also as an unusual additive to meat dishes.

From the largest grade of grapes receive one more version - large, sweet and fleshy raisin with big stones. It is applied in the crushed look to pastries, and also as additives at preparation of various drinks.

The fourth type of raisin - the most widespread in cookery. It has the average size, dark, even in almost black color. Such raisin does not contain stones.