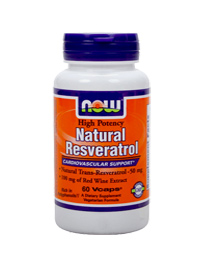 Natural Resveratrol / Resveratrol (natural) - the new connection allocated with use of the latest biotechnology without toxic chemical reagents. This technology ensures full safety of preparations. Resveratrol surpasses effect of already known antioxidants in the activity.

Resveratrol (3,5,4-trigidrostilben) is fitoaleksin which is synthesized in some plants (a pine, grapes, a peanut). The best source of resveratrol is red wine. White grapes and white wines contain not enough Resveratrol. Like all polyphenols, Resveratrol - powerful antioxidant which activity surpasses vitamin E. Resveratrol shows estrogenny activity, contacting the same receptors, as an estradiol, one of the main estrogen of the person. In spite of the fact that hormonal activity of a rezveratrol is much less, than at an estradiol (3-10 microns of a rezveratrol correspond to 0,1 nanometers of an estradiol), in its organism can be so many that he will act even stronger, than an estradiol in physiological concentration.

Unlike an estradiol and a dietilstilbestron who accelerate development of a number of hormonedependent tumors and whose surplus is connected with the increased risk of development of cancer of mammary glands rezveratrol shows versatile antineoplastic action. Experiments show that it inhibits ribonukleotid-reductase and suppresses synthesis of DNA of mammals, directly blocking reproduction of tumor cells. Other mechanism of antineoplastic action of a rezveratrol consists in the competition of a rezveratrol with estradioly for the place of binding on a receptor that reduces the stimulating influence of an estradiol on cells of hormonedependent tumors.

As the risk of osteoporosis which is often caused by decrease in level of estrogen in women in the period of a menopause can reduce all phytoestrogen, resveratrol. Also well rezveratrol influences skin, stimulating synthesis of collagen and preventing its stitchings. Such effect is explained by the combined antioxidant and estrogenny influence of a rezveratrol. Experimental justification was received also by cardioprotective properties of red wine. It turned out that grape juice and red wine do lipoproteins of low density exclusively steady against oxidation in the conditions of in vitro. As oxidation of lipoproteins of low density in blood is the main reason for development of atherosclerosis, the grapes polyphenols preventing such oxidation have to lower risk of cardiovascular diseases significantly.

Resveratrol - the regulator of an exchange of fats in an organism. Atherosclerosis of blood vessels is connected with intake of fats with foodstuff, their absorption in a digestive tract, concentration of lipids (cholesterol and triglycerides) in blood plasma, sedimentation and penetration of products of oxidation of a lipoprotein (fat + protein) in walls of blood vessels with the subsequent sticking of platelets and formation of plaques. It leads to narrowing of a gleam of blood vessels of a muscle of heart, brain and other bodies.

Grape seeds extract contains a complex of bioflavonoids which are not synthesized in a human body: kvertsetin, gesperidin, etc.

Maintenance of one portion (2 capsules):

Recommendations about application: on 1 capsule of resveratrol 2 times a day. For bigger effect it is recommended to accept with the Coenzyme of Q10 and Esther Xi.

Storage conditions: to store rezveratrol in the place, t, dry, cool, inaccessible for children, ° it is not above +25 °C.

We recommend to see
Means toning A13
Dental medications
Hepatoprotectors
Means, used for the gastrointestinal disorders A03
Purgative means A06
Antidiarrheal preparations, means for treating sickness of intestines A07
Means, which increase appetite A15
Calcium gluconate A1A A03
Drugs used in treatment of liver diseases
Means, which influence on the digestive system and metabolism A
Ferment preparations
Drugs for the treatment of gastro-intestinal tract
Drugs for the treatment of diabetes
Medical activated charcoal
Send inquiry
Buy
Contact supplier
Your question has been sent successfully
Consultants of the shop typically answer questions during the day.