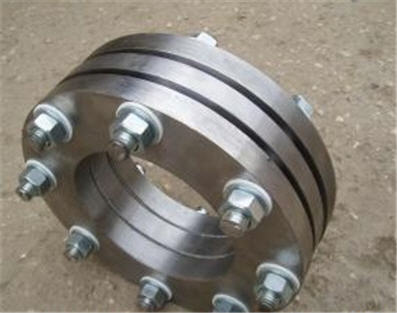 To Order the flanges isolating from the producer in Ukraine,

The isolating IFS flange connection is one of elements of pipeline system and is intended for protection against impact of electrochemical corrosion. As a large number of pipelines are laid underground, the problem of electrochemical impact on the pipeline is particularly acute for those who operate these systems. Electrochemical corrosion of pipelines is a consequence of influence of electric currents of the earth, or as they are called still, the wandering currents. Electric currents get into pipes which have defects of isolation. Getting into the pipeline, electric current forms a cathodic zone on the place of penetration which is not dangerous to system, but on the place of an exit of current the dangerous anode zone which leads to destruction of metal as a result of influence of current is formed. Consequences of such influence can be: metal destruction, formation of cracks that in turn leads to leak of gas, water, oil, etc. Such changes in system can lead to emergencies.

For isolation of sections of the pipeline from passing of electric current use the Isolating flange connection which electroinsulating properties are reached by means of the isolating laying and plugs. The isolating flange connection represents the design consisting of branch pipes, flanges, the isolating rings (laying) between them, the isolating plugs which are installed in fixing openings, and also hairpins, nuts, washers. Appointment and conditions of application of IFS is used as one of means of protection from electrochemical corrosion of underwater and underground (land) pipelines.