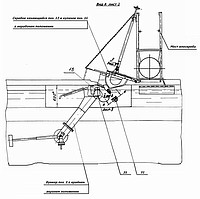 The device for removal of floating substances UPV

UPV devices and its WORK:

The device for removal of floating substances UPV consists of the reception bunker equipped with a float, the taking-away branch pipe, the lever with a cam and the shaking scraper. The float holds the bunker over a liquid surface in non-working situation. During the work of an iloskreb, at the time of impact of a cam on a bunker guide, the bunker it is submerged, and waste liquid directs in the bunker, entraining floating substances which on a pipe get to the special receiver.

We recommend to see
The equipment for sewage treatment
Filter presses for sewage and industrial wastewater treatment
grease separators
Send inquiry
Buy
Contact supplier
Your question has been sent successfully
Consultants of the shop typically answer questions during the day.