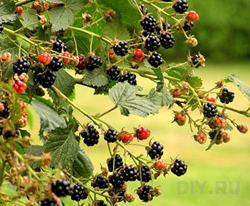 It is slightly more difficult to look after rosyaniky. From the most winter-hardy grades it is possible to grow up an impassable green hedge along a fence.

However harvests from such landings are small as it is impossible to look after plants normally.

To receive a full-fledged harvest, not to do without lane. At least 3-4 wires (also poles will approach) with an interval between them of 30-50 cm are necessary. In a year of landing 2-3 young escapes will grow from a rhizome. In process of growth they are fanlikely tied up to a lane and braided on three lower provoloka.

At education on these lashes of premature lateral escapes 30-40 cm long they are shortened, leaving no more than 4-5 kidneys. New stalks let through the center of a bush, directing them along the top number of a wire. Last year's stalks fructify then they are deleted. At this time stalks of the current year are untied and braided on three released lower ranks of a wire. At the end of vegetation weak tops of young escapes cut off.

In northern regions it is necessary to take care of warming of one-year stalks for the winter. For this purpose late fall they are removed from a lane, stacked and covered with any mulching material or the soil a layer in 10-15 cm. It is impossible to prikapyvat stalks if they are frozen and them it is difficult, without having broken, to bend down to the earth.

In the spring, before strong swelling of kidneys, bushes open and cut off. Delete too long fructifying lashes, and also stalks with the dried-up tops. Those lateral escapes which shortened in the summer on 4-5 kidneys cut off once again, leaving 2-3 kidneys. Such early-spring cutting is carried out annually, since second year. In a bush leave 5-6 fructifying stalks of which it is quite enough for normal fructification, the others cut out at the basis.