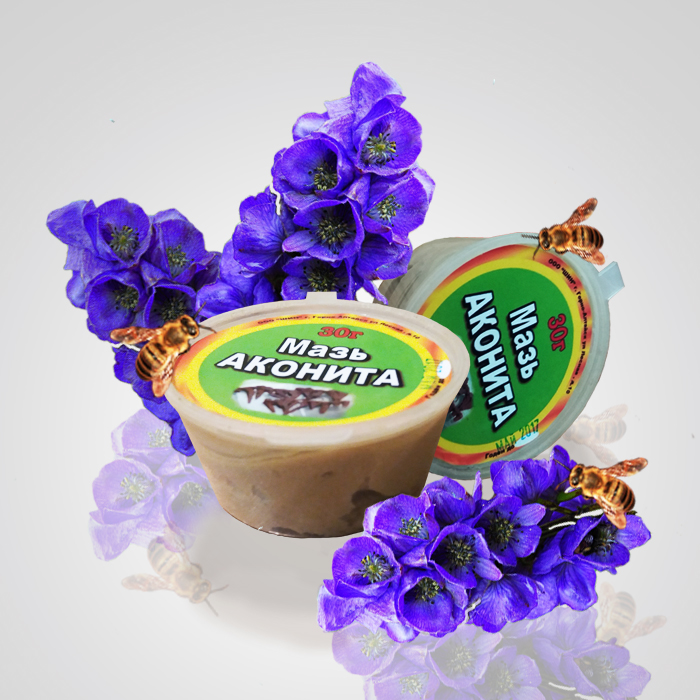 Akonit or the fighter high – the perennial meadow plant reaching  130 centimeters in height and the numbering more than 300 types from which Aconitum napellus, Aconitum exelsum, Aconitum Songoricum are most widespread. Dzungarian akonit in the people carries several names – it is called a blue buttercup, a wolf root, a black potion or the fighter root. As a plant rare, it it is possible to see on pages of the Red List.

Akonit consists of alkaloids of akonitinovy group, flavonoids, tannins, organic acids, macro - and minerals. Akonitina – the strongest vegetable poisons at the expense of which tubers of plants exude the characteristic smell reminding a smell of horse-radish or a celery. Akonitina are the main active ingredients in medicines of an akonit which are used in informal and homeopathic medicine for cancer therapy and a number of other diseases. They have the immunomodulatory, antineoplastic, anesthetizing, anti-spastic, antifungal, antimicrobic and sedative properties.

Salutary features of a plant were known for a long time. Moreover, in not so remote past professional oncologists successfully used akonit in complex treatment of cancer tumors.

The first official notes about curative properties of an akonit in homeopathic doses appeared in the middle of the 19th century. With great respect for an akonit the creator of well-known "Explanatory dictionary" and the doctor on one of professions Vladimir Dahl belonged. Professional oncologists worldwide rather actively applied akonit in practice of treatment of tumoral diseases last century when official himiopreparata not much more differed from an akonitin on the pernicious action on an organism and considerably lost to "curative poison" by efficiency. Traditional medicine till today successfully uses medicines of an akonit for treatment of cancer tumors of skin including melanomas, a thyroid gland, a mammary gland, intestines. Besides, the fighter high finds application in schemes of treatment of a number of the diseases which are badly giving in to therapy by traditional medicines.

The range of indications for reception of an akonit is extremely wide. The surprising medicine has no analogs among phytogenesis medicines by efficiency and divergence of medical action.

Ointment of an akonit of Dzungarian (Aconitum soongaricum) was developed on the basis of an extract from a plant and has all curative properties inherent in this plant. At the same time its application is much safer concerning overdose and emergence of by-effects.

Composition of ointment: extract korneklubny akonita, lanolin, beeswax, vegetable oil. Small stratification of ointment is allowed that does not affect its quality. In that case ointment before application should be mixed a wooden stick of single use.

Method of application: 2 – 3 times a day to apply ointment with a thin layer on external defects of skin, including a tumor, skin along nervous trunks, over nervous textures, lymph nodes, joints, mammary glands, a thyroid gland, in zones of compliance to internals on feet and palms, in areas of a projection of sick bodies on a body, around open wounds and ulcerations. Duration of a course of treatment, frequency rate of application within a day and the fields of putting ointment are defined by the doctor.

Prevention: at use of ointment for treatment of oncological diseases of the place of putting ointment not to pound, not to mass and not to cover with the warming compresses! Do not exceed the dose recommended by the doctor. At emergence of initial symptoms of intoxication (dizziness, nausea or vomiting, feeling of crawling of goosebumps, a language sleep) to stop use of ointment, to drink a lot of water, to accept a sorbent, immediately to consult with the doctor.

After putting ointment well wash up hands, you watch that ointment did not get into eyes. Throw out the used packing there where neither the child, nor an animal will be able to take it.

Storage conditions: to store in dry, protected from light and the place, inaccessible for children, at a temperature from 0ºС to 15ºС.

Suitability term to the use: 12 months of date of production.

Does not contain genetically modified components, artificial dyes and preservatives.