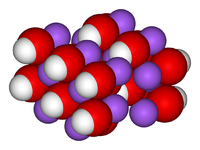 Sodium caustic firm - presents itself white pyretic in the form of scales, granules or fused weight. It is strongly hygroscopic, we will well dissolve in water. At dissolution in water allocates large number of heat. Sodium caustic liquid - the colourless or painted liquid in which the deposit vykristallization is allowed.

The caustic soda is applied in many industries and to domestic needs:
Soda is applied in pulp and paper industry in production of paper, cardboard, synthetic fibers, wood and fiber plates.
In chemical industries — for neutralization of acids and acid oxides, as reagent or the catalyst in chemical reactions, in chemical analysis for titration, for etching of aluminum and in production of pure metals, in oil processing — for production of oils.
For biodiesel fuel production — the usual diesel fuel received from vegetable oils and used for replacement.
In light industry by production of silk, and also in technology processes of bleaching of fabrics
In automotive industry soda is used in production of alkaline accumulators.
In the pishcheky industry for washing of the equipment and very organichenno by production and processings of food. It is registered as food additive of E524.