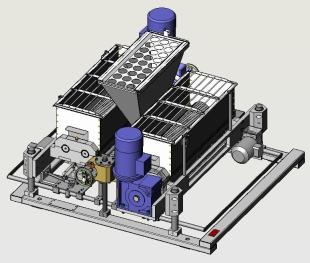 In stock
Reconfirm the price with seller
Seller
Ukrprodmashbud, OOO
Ukraine, Blistavitsa
(View map)
Call
Products of other enterprises
Description
The car universal I8-MFU (I8-MPK) is intended for formation and laying on a tape of the oven conveyor of preparations of gingerbreads from the adobe test with a stuffing, shortcake with a wheat dough stuffing. Process of formation of gingerbreads is carried out by breakdown through nozzles of test plaits with a stuffing and offices of single preparations by diaphragm cutting, and also formations of preparations of gingerbreads and cookies of various configuration without stuffing through nozzles and cuttings of the received test plaits on separate preparations by method of string cutting.