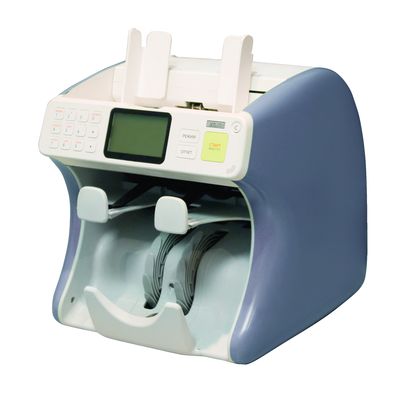 The banknote counter with function of sorting SBM SB-2000S

The device of this kind is necessary for sorting and ordering of notes on various signs: to the face value, decay, face and sizes. SBM SB-2000 processes impressive volumes of cash in the shortest possible time. The device is effective and reliable. Feature of model the possibility of verification of notes on authenticity is considered.

Sorters meet in all types of cash desks where the cash turnover creates problems for employees of an institution. Processing of the arriving credits and deposits, delivery of means to clients of a certain face value, calculation of day, week, monthly revenues and many other things significantly becomes simpler with similar devices.

Functionality and the menu completely Russian-speaking and localized. The principle of operation of the device is based on scanning of the first arrived note and the subsequent comparison of other face values with a sample. SBM SB-2000 in several modes works, the user settings can be kept. Dimensional ZhK the screen displays results of all operations with a possibility of the account and summation of the previous data.

Archiving and cleaning of memory is carried out by means of connection of the device to the computer or the optical sensor. The software is updated without the need for direct access to a programmator.