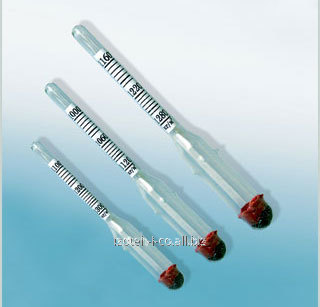 The areometer for AE electrolyte

70% of positive reviews from 10
Call
Products of other enterprises
Technical characteristics
Description
Are used for measurement of density of electrolyte Note
indications count on bottom edge of a meniscus.

Technical characteristics Situations when it is necessary to measure density of this or that liquid are frequent. It is possible to make it by means of the special device called by the areometer. Its design is quite simple. As a rule, the areometer represents a glass flask. In its lower part freight which is fixed by the special structure preventing its shift settles down. The scale with divisions by which it is possible to determine density is applied on the top part of a flask. Depending on a type of liquid which density needs to be measured distinguish the areometer for electrolyte, alcohol, oil, milk, salt, sugar and others.
As a rule, these devices are used in vitro when it is necessary to determine density or specific weight of this or that liquid substance. However, they find the application and in life. Especially the areometer for electrolyte which has in the arsenal many motorists was widely adopted.
Contact the seller
The areometer for AE electrolyte