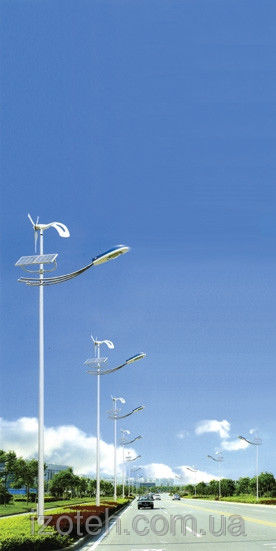 67% of positive reviews from 9
Call
Technical characteristics
Description
The system of autonomous lighting represents a column on which the wind generator of low power together with the solar panel and the LED lamp is mounted.

The system during the day transforms wind power and the sun to electric energy by means of the wind generator and the solar panel and accumulates electric current in accumulators which are in the box at the column basis.

The controller operates system of a charge category of the rechargeable battery. At approach of a night-time the system lights the territory for the account to electricity from accumulators.

The system of lighting does not require laying of a power line and respectively obtaining various permissions.

Installation of system forever removes the question connected with rise in price of the electric power.

There is no need for service of system.

The design can be in places remote from industrial sources of the electric power.

The system is especially effective in cases of need of illumination of abnormally dangerous sites of roads (road outcomes, bridges, intersections, railway, moving, and so forth).

As a rule, payback period of system of autonomous lighting about 3 years. And service life of the presented systems - 15-25 years.