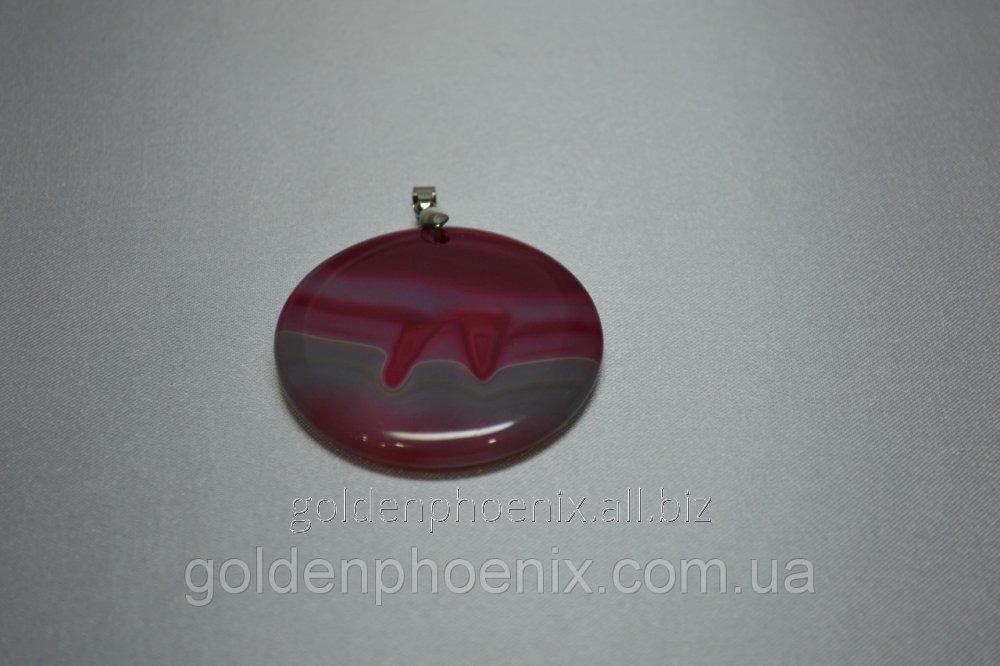 Agate is a layered chalcedony, a kind of quartz. It is very different on the appearance. Consider that it gives courage, tranquility, promotes longevity, develops a subtlety of feelings, attracts success. Black agate gives the power to the owner over hell forces. Layered agate gives to men a charm, they are pleasant to women. Agate is capable to preserve against alcoholism and drug addiction, drives away evil thoughts; if to put it under a pillow, you will see happy dreams. This stone also strengthens sight, regulates digestion, protects from diseases of kidneys. Moss agate clears immune system.

In the ancient time agate was considered as a favourite stone of the goddess Pomona who was a patroness of a harvest, gardenings. In the medical purposes an agate beads recommends to carry at long, long cough, diseases of a throat and teeth, at spasms. The frame from copper increases properties of a stone.

There are several versions of emergence of the name of this mineral. For example, some scientists consider that the name "agate" came from Greek abates - happy. Others claim that a mineral Akhates in which it was got in the ancient time received the name from the Sicilian river. There are other names of agate and its versions: sardonyx, carnelian sardonyx, nerakhitovy onyx, Arab onyx, bastionny agate, dendritovy stone, lastochnik, owl's eye.

Medicinal properties Litoterapevta claim that agate is capable to help the owner to cope with many illnesses. It is only necessary to carry it correctly. For example, at long cough, quinsy it is carried in the form of a beads, at various diseases of teeth — in the form of earrings. At gout, diseases of joints put on agate bracelets. The ring with agate is carried on a ring finger of the left hand by those who suffer from heart diseases; on a middle finger of the right hand — the people inclined to hysterics having sleeplessness and baseless scares. The agate brooch helps to get rid of such illnesses as asthma, pneumonia, bronchitis.

Agate depending on color of a mineral influences any chakra. Red exerts impact on a warm chakra; blue — on the chakra managing activity of a thyroid gland.

Magic properties In Ancient Egypt by means of agate products people were protected from a thunder-storm. Travelers, especially those who needed to cross the desert sucked small plates from this stone when thirst began to torment them. Romans devoted this mineral to the goddess of gardening Pomona and in a landing time of plants dug in the small balls turned from agate to the earth.

Was considered that agate helps to remain faithful beloved each other therefore when separation was coming them, they exchanged rings with an agate insert. Properties to improve sight of the owner, to do it eloquent, perspicacious, even to clairvoyants were attributed to agate.

Most of all agate suits the people born under the sign of the Taurus. They should carry this stone in a copper frame. Also the people born under signs of Cancer, Aquarius, Scales can carry the agate which is put in order in gold or silver. Fishes can carry this stone too if put on ornament with it not more often than once a week. 'This stone is absolutely contraindicated to Sagittariuses and Arieses — it excites and irritates these people, brings vanity and panic in their life, does them pathetic and insignificant in the opinion of people around.

Also you can get from us: