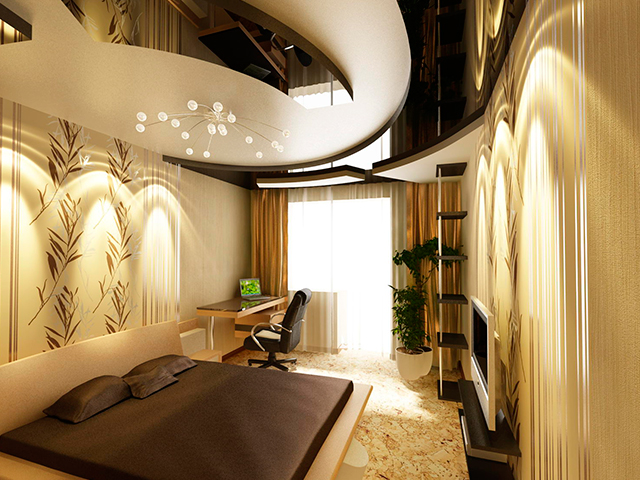 Multilevel stretch ceilings - it is beautiful!
With the advent of two-level stretch ceilings those times when multilevel designs on a ceiling could be made only of gypsum cardboard ended. At the same time for creation of a two-level ceiling it was necessary to spend plenty of time for hard putty, a primer and painting of a ceiling. And in general the two-level stretch ceiling is stylishly and is modern, fashionably and effectively. The multilevel ceiling is not just finishing of a ceiling, it changes room geometry, mood in the room and zones space. Who did not become the happy owner of a two-level stretch ceiling yet - hurry to order something extraordinary and memorable that guests did not remain are disappointed with your new apartment.
Advantages of two-level stretch ceilings:
1. Fast installation. During creation of two-level stretch ceilings it is not required to putty them after installation, to rub clean and paint therefore everything happens much quicker than to habitual gypsum cardboard. You need only to call the serious organization and to call the measurer. Actually not each firm undertakes installation of two-level stretch ceilings because such work demands more knowledge of geometry, it is for this purpose insufficiently simple to be able to mount a profile and to pull a ceiling. Than the form of your ceiling is more difficult, especially it is laboriously necessary to mark everything and to think over before installation.
2. Pure installation. As it was already told above, such ceiling does not demand work of the painter and a shpaklevshchik therefore at you will not stir paint and to rub a bespeschanka that relieves of a large amount of dust. Naturally before installation of a two-level stretch ceiling, to you all the same will cover furniture and a floor with a film.
3. Combination of flowers. Choosing stretch ceilings for creation of multilevel designs, you can safely combine dark and light shades, without being afraid that the line of a joint can be not ideal. In a case with painting of plasterboard designs, it is very difficult to make accurate and equal transition between two contrast colors in different levels therefore plasterboard two-level ceilings, as a rule, of one color, are more often than white. With arrival of two-level stretch ceilings, there was an opportunity to do one level of a dark shade, and the second light, and the line of a joint will be ideally equal.
4. Use of different invoices. This unique property in two-level stretch ceilings - a possibility of creation of different levels of a ceiling with different invoices. You can not just receive a combination of a glossy and opaque ceiling or black-and-white and and make one tier with stars, the second with illumination, and the third with a photo printing. Any other technology of finishing of ceilings does not allow to create it.
5. Zoning of space. You can allocate different functional zones in one room not only levels, but also different invoices and shades of a ceiling. It opens the mass of opportunities, especially now when in fashion open plannings, rooms studios, sliding partitions and dynamic transformation of space, depending on time of day or change of mood. You can create the star sky in a bedroom zone, a glossy ceiling in a zone of kitchen and level with a photo printing over a recreation area. Two-level stretch ceilings are just unique technology which changes idea of design of apartments in principle.
6. Zaplenochny illumination. The main difference of tension two-level systems from plasterboard is the possibility of creation of zapotolochny illumination. It is not just hidden tape of light-emitting diodes on box perimeter, it is the whole level of a ceiling which burns with a daylight. It is created by uniform placement of LED tapes behind a translucent film - beyond its powers for plasterboard designs.
7. Unlimited number of forms. As well as with gypsum cardboard,-level stretch ceilings will allow you to create any most non-standard forms which will visually change space. The form can be the most different: circles, ovals, waves, clouds, semicircles and even a flower on a ceiling.