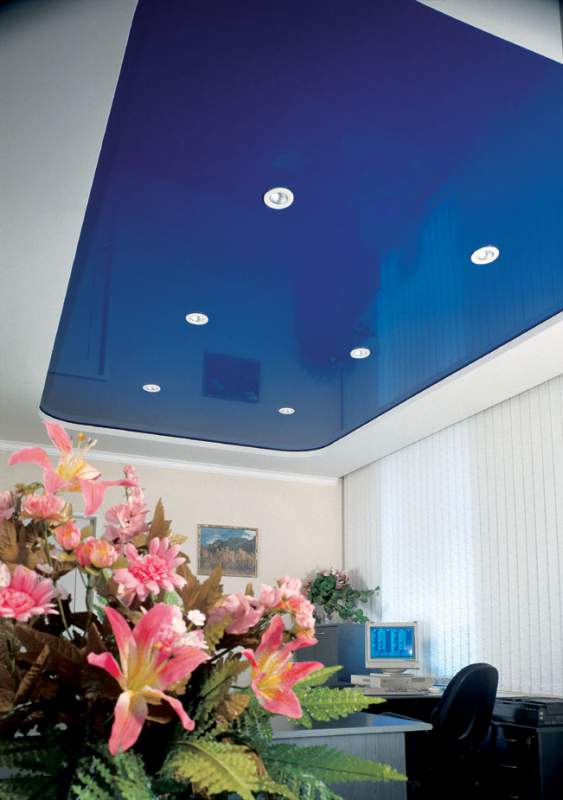 We establish stretch ceilings in Poltava and area.

Using only a high-quality film of the European producers,

and also materials of world famous brands Clipso and Barrisol

All film is certified in Ukraine.

Warranty period of operation of 12 years.

Work is performed within one working day, at a minimum of dust and noise indoors.

Departure on measurement and consultation in Poltava and area it is FREE!

From the moment of signing of the contract and before a product appear at your place there will pass no more than 10 days.

Modern stretch ceilings for the first time appeared in France more than 30 years ago. The founder of stretch ceilings the company "is considered NORMALU S.A." (a trademark - "BARRISOL"). The principle of stretch ceilings offered by them from PVC film for a long time was included into the list of construction technologies and allowed to solve those problems in the field of finishing of rooms which were considered as unsoluble earlier.
For decades of development of technology there was a mass of the companies making stretch ceilings. All of them are similar to the technology of the French ceilings from PVC film for the first time offered by the NORMALU S.A company. Today more than thirty companies making PVC film are presented at the European market.

Modern stretch ceilings are produced from a polyvinylchloride film which by means of the heat gun is warmed, stretches and fastens in the metal or plastic profile established on perimeter of walls. Cooling down a cloth, it stretches, leveled, forming ideally plain flat surface, hiding communications and defects of a basic ceiling.

Today stretch ceilings, thanks to availability of PVC - films, became an integral part of the repair and construction industry. Installation speed, reliability, the huge choice of color scale - all these criteria promoted prompt development of vinyl ceiling coverings.

We recommend to see
Tension ceilings
Spare parts for suspended ceilings
Send inquiry
Buy
Contact supplier
Your question has been sent successfully
Consultants of the shop typically answer questions during the day.