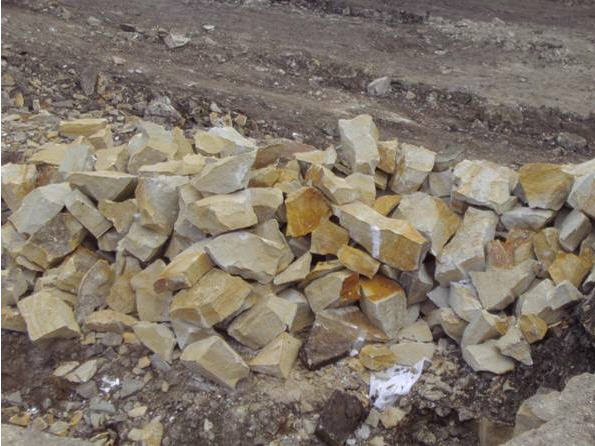 Stone wall from Yampolsky sandstone. A stone rubble for finishing of walls, facing of facades and socles of buildings. Sale of sandstone across Ukraine, delivery of a rubble stone, blocks, sleb, plates from sandstone

from Yampolsky sandstone (The Vinnytsia Region)

Application: for a laying of walls of houses, fences and other constructions, a paving of roads, the areas and t.p

Stone oversized (boulders) for landscaping, of irregular shape and the sizes, from 50 to 1000 kg and more.

Color is white, ochroleucous, with stains and another


PESCHANIK is the natural stone of a sedimentary origin consisting generally of quartz particles which communicate among themselves by means of other minerals, such as silicon dioxide and a carbonate. On mineral structure, physicomechanical properties PESCHANIK not much more concedes to granite and quartzite. color of sandstone can change from white (light gray), beige to red, brown. This type of a stone is very durable.

Has the highest physicomechanical properties PESCHANIK with the siliceous and carbonate cementing substance. Fire resistance of sandstone (do1700 °C)

Examples of application: facing of facades and socles of buildings, fences, paving of paths and platforms, rubble stone, landscaping. In an interior it is used, generally in the form of a tile for facing of steps, fireplaces, and also a floor and walls.

The set of the well-known architectural objects and Wonders of the world is constructed of sandstone. In France - Notr Damme De Pari, in England - Buckingham Palace, in the USA - the White House, in India - the majority of temples and of course famous Akshardam (The eighth Wonder of the world of our era). This list can be continued indefinitely, so sandstone is one of the main materials for construction and finishing for more than 5000 years of history of development of humanity.

Similar company products
Contact the seller
Stone wall from Yampolsky sandstone. A stone rubble for finishing of walls, facing of facades and socles of buildings. Sale of sandstone across Ukraine, delivery of a rubble stone, blocks, sleb, plates from sandstone

We recommend to see
Natural stone
Granite
Sandstone
Send inquiry
Buy
Contact supplier
Your question has been sent successfully
Consultants of the shop typically answer questions during the day.