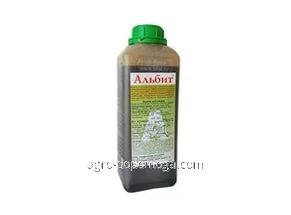 Stimulator to growth of Alb_t, r

Albite – complex preparation, biofingitsid, antistressant (antidote) possessing properties of growth regulator and fungicide is applied to processing of seeds and at extra root processings of plants.

Antidotal effect
The antidotal (antistress) effect of Albite when using with chemical pesticides makes from 5 to
93%, otherwise, Albite is capable to prevent such losses of harvest.

Fungicidal action
Fungicidal effect of Albite is based on strengthening of immunity of plants, stimulation of their natural ability to resist diseases. Thanks to strengthening of natural protective mechanisms of plants, Albite works as system fungicide of broad spectrum of activity.
Owing to the mechanism of action (immunization) the preparation has the pronounced preventive and weak treating effect and does not possess the eradicating action.

Strengthens supply of plants with nutrients
Due to reproduction in the soil of nitrogen fixers, fosfatsolyubiliziruyushchy and other useful bacteria Albite increases use factors of elements of mineral nutrition by 18-47% plants from the soil and fertilizers. As a result, plants use the available nutritious resources more effectively, allowing to cut consumption of fertilizers on 10-30%. On sredneokulturenny
to the soil use of Albite is capable to replace to 18 kg/hectare of of century of nitrogen fertilizers and 14 kg/hectare phosphoric.

Albite – preparation of new generation of biological origin which basis are not live bacteria, and the purified active ingredient received at microbic fermentation.
Advantage of Albite before similar preparations is reduction of influence of negative environmental conditions and compatibility with all pesticides and fertilizers.