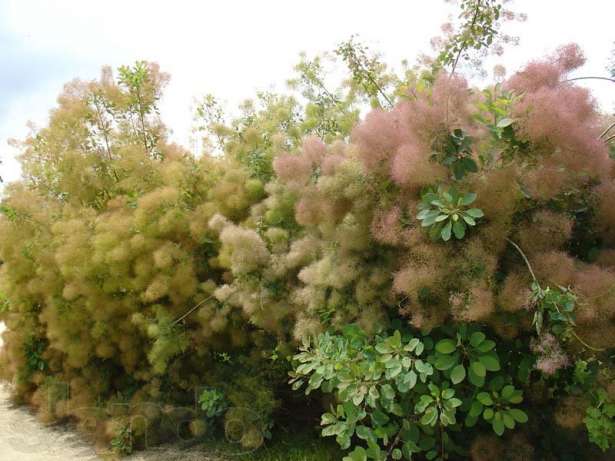 Cotinus coggygria - a tree or the bush of family of Sumakhovye possessing such high decorative qualities that his small popularity is simply amazing. It is seldom possible to meet a skumpiya in gardens of fans. And meanwhile this plant is capable to decorate with itself each garden.
The skumpiya ordinary (it is a skumpiya a koggiriya and a skumpiya tanning) grows in a wild look on stony soils of the Crimea and the Caucasus, but differs in unpretentiousness, sufficient frost resistance, and can be grown up in all territory of Ukraine and the European part of Russia. Prefers the dry, sandy, trained soils and solar location, does not love only crude sour peat soils. On the grown poor infertile soil autumn coloring of leaves of a skumpiya is much more juicy and is brighter. It is reconciled also with a penumbra, but grows in this case more slowly, yields less fruits and loses part of the decorative effect.
What is the skumpiya so attractive by? Exotic type of inflorescences and in the color of foliage. Skumpiya a koggiriya (tanning, ordinary) - the bush reaching usually height of 4 - 5 meters. Leaves of 5 - 7 cm in length, an oval form, in the summer green, and at the beginning of October changing coloring for various shades of violet - red, scarlet, orange or yellow flowers. The effect is unusual, reminds Yesenin's lines: �в to a garden burns костер� the skumpiya tanning (a parikovy tree) in June Blossoms. Flowers its pieces of chalk and in itself are ordinary - looking, but, being collected in large lacy inflorescences whisks from 15 to 30 cm long of yellow or pink, red color, look very attractively. And a little later on pedicels grow quite long threads - hairs of purple or white color. Intertwining and sputyvayas among themselves, they form the dense air mass reminding magnificently shaken up curly wig. From here and national names of a skumpiya tanning: parikovy tree, smoky tree (as if shrouded in a smoke cloud). Species of a plant at this time really fantastic. Delivery across Ukraine