ALL.BIZ Ukraine Ukraine products Agricultural Agricultural machinery and equipment Hitched implements and agricultural equipment Automated control systems for seeding Sensors of level of seeds in devices UI "FACT" and EU "SPUTNIK", for definition of existence of seeds in the set point. Are carried out by the special order. 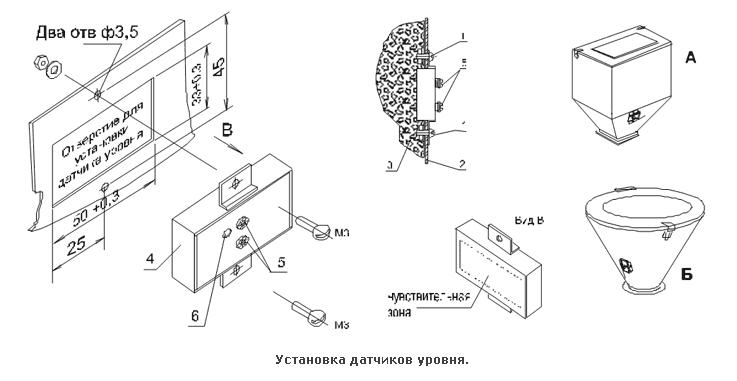 Sensors of level of seeds in devices UI "FACT" and EU "SPUTNIK", for definition of existence of seeds in the set point. Are carried out by the special order.

The sensor of capacitor type is made in the rectangular, metal case of stainless steel. From the face of the case the sensitive zone, on the opposite side of the plug of food 12B is located. For sealing the electronic payment of the sensor is filled in with an epoxy compound.
The sensor by means of two M3 screws on a wall of the grain or tukovy bunker fastens. The point of fastening is defined from a condition that the volume of seeds or tuk below a point of installation of the sensor has to be enough, at least, for crops full or one and a half lengths of the field. At such arrangement of the sensor in case of a signal of need of additional charge of the bunker normal performance of crops until the end of a number of the field where additional charge will be executed is guaranteed. The stop among the field due to the lack of sowing material will be excluded.

Principle of work
The mass of seeds or tuk located on a surface of the sensor leads to a luminescence of a light-emitting diode 6, and the electronic scheme sends a signal to the monitor that seeds in a point of installation of the sensor of level are available i.e. everything is all right. In the absence of seeds on a surface of the sensor of property of a sensitive zone changed, the light-emitting diode 6 does not shine. The electronic scheme sends the message to the monitor on that, properties of the capacitor field changed. On a board of the monitor the inscription "LOAD SEMYON" or fertilizers appears. Emergence of an inscription is followed by a short sound signal.
The board with the text and a sound signal will be appear periodically until sowing material is not loaded.
In FIELD 23 and FACT monitoring systems there is a possibility of program shutdown of sensors of level.
Sensors of level turn on in a set of the FIELD 23 and FACT monitoring system at the request of the customer.

Similar company products
Contact the seller
Sensors of level of seeds in devices UI "FACT" and EU "SPUTNIK", for definition of existence of seeds in the set point. Are carried out by the special order.