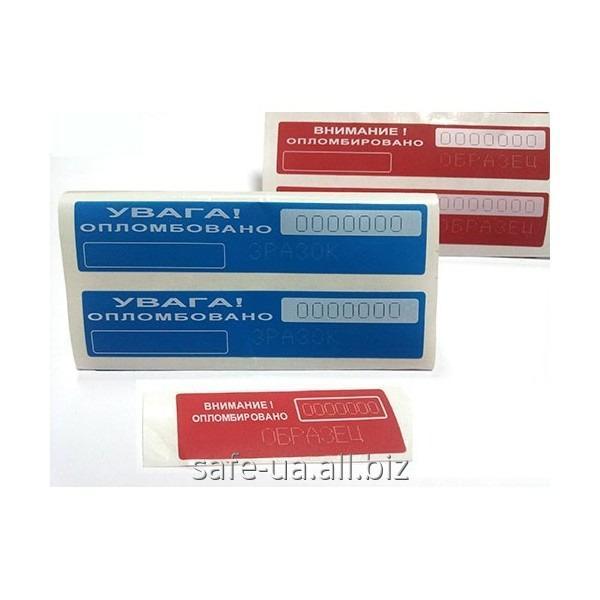 Seal sticker of the Barrier model of 60х20 mm are the shortened option of a full-scale seal with the same name. Possesses the same information and protective properties and serves for the warning of illegality of penetration, and also fixing of the fact of such penetration.

The seal is made of special thin plastic, has numbering and a layer from the glue structure resisting to temperature. Unsticking leads to manifestation of the inscription "OPENED is OPENED" which is not closed by repeatedly pasted seal.

"Barrier" of 60х20 mm - a seal of universal appointment, is applied in all spheres.

Is on sale in packings from 100 pieces (multiply 100 units).
The minimum sum of the general order is from 300 UAH.

Seals of a sticker are the specialized stickers intended for restriction of access to storages, unprotected rooms, containers of various type, to metering devices and control, to the transported objects, etc. Protective stickers serve also for informing on already happened unauthorized penetration into a zone of limited access.

Similar seals are rather difficult multilayered sticker with several degrees of protection which set differs at various models. For example, some models are intended to fix not only mechanical influence (an otryvaniye, unsticking, an otparivaniye), but also attempts to interfere with operation, for example, of instrumentations by means of permanent magnets, and also electromagnets and radiators of a variation magnetic field.

The glued seals — it is simple, convenient, available

All models provide manifestation of the inscription "OPENED is OPENED" at a seal otryvaniye, and this inscription is not closed even at repeated gluing of a sticker. All similar products of our enterprise are the number seals of a sticker having consistently increasing numbering. Unique number helps to order the account, and also to strengthen security degree as the number seal cannot be changed for similar imperceptibly.

Release of seals of our enterprise is adjusted according to requirements of DSTU 4551:2006 of Seals indicator. The received Certificate of conformity No. ODS-059-0043 extends to all production.

If you have a need for restriction of potential penetration on a certain territory, to rooms, to instrument boards and the other places closed for access, suggest to use production of our enterprise and to buy the sticker seals which are the simply and the tool effective for this purpose.