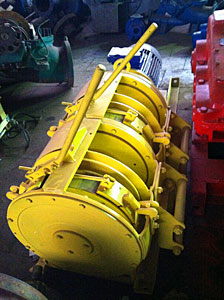 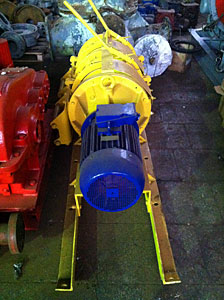 possess a certain design, consist of so-called separate transpontabelny knots, the following elements are basic of which: electric motor, drive reducer, blocks of a snare and single drum. Management of the winch manual. Skreperny winches are not completed with a rope and the scraper.
The electric equipment of the winches intended for mines dangerous on gas and dust is executed in explosion-proof execution.

The winch skreperny differs in simplicity in management, a simple design, and also compactness and has big traction efforts.

Skreperny underground (mine) electric LS-10, LS-17, LS-30, LS-55, LS-110 winches are used to transportation of the mountain weight separated from the massif on horizontal and inclined excavations, for movement of freights and the equipment during the pogruzo-unloading and assembly and dismantling works in the conditions of mines, etc. Skreperny winches are used also on open-cast minings.

Back and forth motion of the scraper is carried out at inclusion and switching off of a snare and single drum by the emergency brake of planetary reducers. For inclusion of a snare drum it is necessary to tighten the corresponding brake at the working engine, at the same time there is a winding of a rope on a snare drum that causes movement of the loaded scraper. Along with a single drum the rope is taken up. The scraper moves by means of variable inclusion of a brake of planetary reducers of working and single drums in the necessary direction.

LLC Company Plazma ® is a producer of the following types of skreperny winches:

We recommend to see
Mine elevating machines
Boring loading machines
Machines loading for mines
Skips
Winches for mines
Send inquiry
Buy
Contact supplier
Your question has been sent successfully
Consultants of the shop typically answer questions during the day.