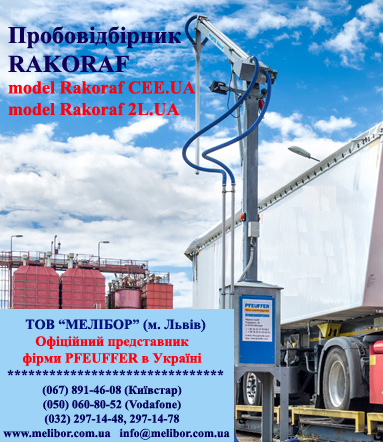 The sampler of Rakoraf CEE. UA is intended for reliable and bystry selection of test of different types of grain and maslyanichny crops from open motor transport.

Overall performance of a sampler is provided with the principle of selection of test (Convac© system). The design used at the same time zondaobespechivat reliable selection of test. The number of the selected test does not depend on the time spent of the probe in an embankment. From depth 1 it motbiratsya 500 gr. tests, at immersion on the 2nd meter depth - 1000 gr. Test is selected from the lower layer that is very essential at selection of grain which contains small particles of impurity, a nakhodyashchikhsyana day of an embankment.

Telescopic (sliding) horizontal part of a sampler (length of 2, 40 m) with the probe moves forward at the length up to 4, 40 m (fashion. CEE), from 0 to 350 hail turns in the horizontal plane. , carries out the movement on a vertical. At immersion of the probe in an embankment grain is sucked in in the probe and moves on a pipe in the reception bunker (cyclone) established in laboratory.

After the end of selection, grain from the reception bunker gets to an automatic divider in which there is a test division. After division of test in a divider its surplus gets to pneumotransport system and is removed from laboratory (back in the car or the accumulative bunker).

Control is exercised remotely, by means of the manual control panel which provides simultaneous performance of 3 operations of operations (the movement in the vertical and horizontal planes, vydviganiye/a zadviganiye of a telescopic horizontal part) that allows to reduce significantly time spent for test selection.