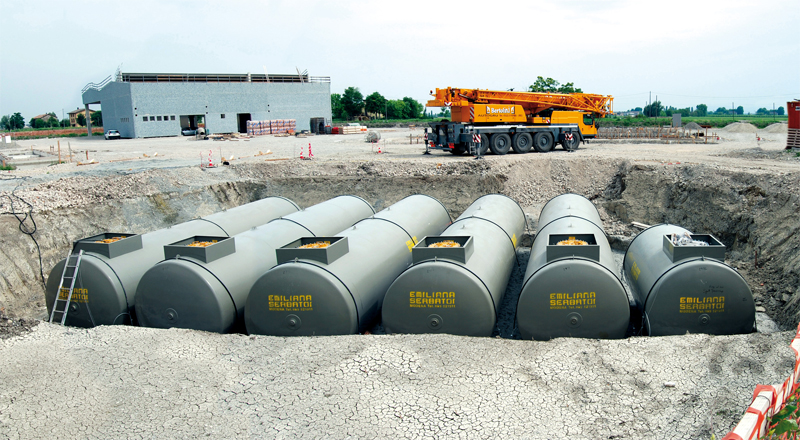 Cylindrical horizontal one-and double-walled reservoirs for underground storage of combustible and nonflammable liquids. Are developed and made according to the UNI EN12285-2 standard, are made from sheet steel (TUUNI EN10025) have the convex bottoms; the outside cover is welded by method of arc welding under gumboil while the internal part of the reservoir is executed by a MIG welding method (welding by not melting electrode in the environment of inert gases). Process of welding meets standards of EN288.

All details are calculated according to the existing European rules and norms.

One-wall reservoirs are manufactured in the form of an impenetrable cover. They are similar to an internal tank of double-walled reservoirs.

One-wall reservoirs are generally used for:

Double-walled reservoirs it is, as a rule, used for:

Outer coatings:
Each reservoir is covered with an outer protective sheath which also acts as the cathode protection.
The external covering of reservoirs is tested high tension to be convinced of integrity of a cover. There are several types of outer coatings.
Polyurethane: the surface of steel reservoirs is exposed to sand-blasting (to SA 2.5 - ISO 8501-1) and becomes covered by a layer of the gray polyurethane pitch of type 868,06 consisting from 2kh components. The covering is carried out by method of hot drawing and excludes use of solvents (Part 3 standard NFE 86 - 900, DIN 6607 and DIN 4681).
This covering represents a seamless protective film with high mechanical strength on a gap. Mechanical strength of material together with chemical firmness does this covering to the best in the class on degree of protection of reservoirs against external influences and guarantees the best preservation of the underground reservoir.