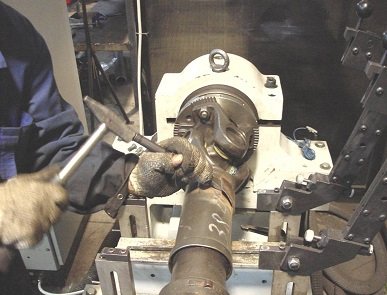 What is the driveshaft?

The driveshaft is the detail which transfers the torque from the transmission to the leading bridges of the car.

The design of the driveshaft consists of the following elements: the shaft, the sliding forks, crosspieces, the flange of forks, details of fastening, sealants, and also some other details, depending on the design.

Such types of driveshafts are allocated:

The crosspiece, shlitsevy connection and the suspended bearing are considered as the most important details of the design of Cardan. The crosspiece of the driveshaft is intended for transfer of the rotary motion between two connected shaft which are located under different corners on the relation to each other. Shlitsevy connection provides change of working length of Cardan car suspension bracket operating time, and the suspended bearing fixes and supports shaft provision.

How to define malfunction of the driveshaft?

Reveal Cardan's malfunction (or details of its design) and to establish its reason, only the experienced master at detailed survey of the shaft can. But, there is the number of factors which can indicate the possibility of breakdown, namely:

Knocks, noise, hard blows after inclusion of the check point and at the start of motion;

If you revealed one of above-mentioned "symptoms" or a little from them, then follows you without delay Cardano will address professionals on repair. Always easier and cheaper to reveal and to remove the cause, than then to eliminate effects. Also, it is important to remember that after any kinds of repair work, it is necessary to make Cardan's balancing.