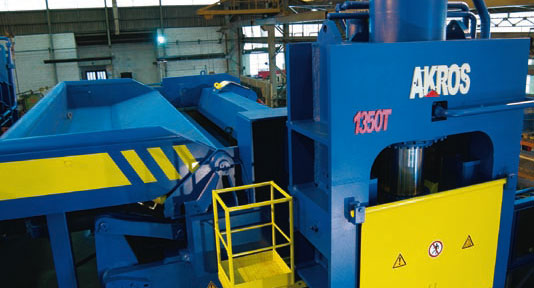 Press scissors with a lateral press by effort of 1350 tn

In stock
Reconfirm the price with seller
Niktehlizing, OOO predstavitelstvo DANIEL HENSCHEL ( ranee AKROS HENSCHEL )) v Ukraine
Ukraine, Nikolaev
(View map)
Call
Description
Press scissors with a lateral press by effort from 900 - 1600 tn
Principle of work
Preryvna automatic cycle of cutting
Pressing in the manual mode by means of a lateral press and 1 cover with reclosing function
Loading of a box directly or by means of a trough
Possibility of adjustment of an angle of pressing on a lateral press
Indexation of a knife frame

The scrap metal is loaded into a press chamber. The lateral press and a cover are put in action by the operator independently from each other. Big efforts allow to podpressovyvat scrap metal quickly and with high efficiency.

The lateral press makes pressing on width, and with a certain stock of the course - up to the width of a bar, smaller, than the cut width then the press automatically comes back before cutting to a necessary mark.

The press cover closes a chamber, pressing metallotkhoda also with a course stock - deeply in relation to the top mark of a press chamber. Function of the increased course of a lateral press and a cover provides formation of a bar smaller on section, than the cross section of a press chamber that is necessary for increase in efficiency of pressing and decrease in wear of futerovochny plates of a chamber when giving a bar in a cutting zone.

After positioning of a lateral press and a cover start-up of an automatic cycle is made. The pusher step by step gives the pressed bar at the cut length which is previously set by the operator.

upon completion of cutting or packing the pusher comes back to a starting position, the lateral press and a cover open a press chamber for new loading.
The increased durability and power
Modularity of hydraulic blocks
3 possible options of a design box / lateral press:
Box with two or three levels
Cover (integral or from two parts)
Lateral press parallel or with the adjustable angle of pressing
Existence of a cupola as an option
The box model with three levels allows to carry out processing in the continuous mode
Contact the seller
Press scissors with a lateral press by effort of 1350 tn

We recommend to see
Shears for metal
Multituls
Send inquiry
Buy
Contact supplier
Your question has been sent successfully
Consultants of the shop typically answer questions during the day.