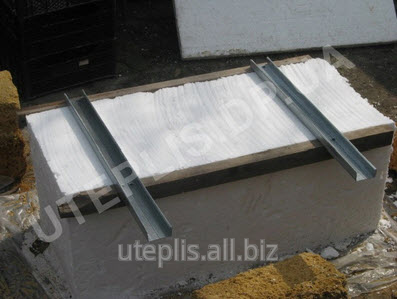 Warm in the winter, cool in the summer, cozy and comfortable. Unless the modern house has to be not it? Each of us remembers old antiquated houses with thick clay walls which in the best way satisfied to our desires. But time goes, and old kind adobe gives way to new progressive technologies in the sphere of construction and thermal insulation. Carbamide polyfoam - penoizol belongs to one of such materials. It prevails the name from the name of pitch which is its part.

Penoizol apply in construction in the form of blocks, plates, shells or filling in a cavity of a design of the weight received by mechanical mixture of pitch and frother with the subsequent foaming, hardening and drying of ready foam.

Despite variety abroad of qualitative heat-insulating materials, penoizol and there it is demanded - in many respects thanks to the high technological effectiveness: abilities to fill hollow designs directly on places. Our experts make warming penoizoly as complex warming of the apartment or house , and separate parts: warming of walls and facades , warming of a roof and penthouse , warming of a floor and ceiling , warming of a balcony and loggia .

Filling of a sufleobrazny heater in a cavity (in various manifestations) practices in the developed countries. If when warming by plates or mats, abroad prefer nice on the touch gas-filled extruded plastic or mineral-cotton heaters more often, then in cases when it is required to fill with heat-insulating material a cavity, neither different types of expanded polystyrene, nor fibrous insulators can compete with a penoizol.

Besides, also non-standard methods of application of polyfoam are known. In the Czech Republic, for example, three-layer reinforced concrete panels, with a layer of a mofoterm 50 mm thick are used. In the USA experience of production of hollow concrete blocks where cavities are filled akrolitfoamy and dinafoamy is known.

For today is the most economic of highly effective heat-insulating materials. The price of production of a penoizol is 2-10 times lower than the known heat-insulating materials (expanded polystyrene, polyurethane foam *, mineral wool, basalt plates, fiber glass, perlite, etc.). It can directly be made on a building site that allows to exclude expensive transportation costs and losses of material when transporting.

Liquid penoizol it is simple in production, is technological in application, is fireproof, an excellent sound insulator. By calculations of experts the polyfoam 5 cm thick layer on the heat-insulating properties is equivalent to the meter thickness of a wall from a brick that gives the chance to apply it in various types of three-layer designs.

Vapor permeability is very important in a case when warming indoors and inadmissibly formation of condensate on an internal surface of a wall is made, use of any other steamproof material will lead to the fact that the wall by all means will dampen and ideal conditions for formation of a fungus and a mold will be created. Penoizol not capable to independent burning after removal of a source of fire and not allocating when burning highly toxic substances.

It is not damaged by rodents therefore it is applied at heat insulation of the rooms and refrigerators used for storage of foodstuff. Thanks to these advantages, eventually, the low cost of a design at rather high quality of thermal insulation is provided and approximately by 4 times terms of performance of work are reduced. On appearance, according to the characteristics, it is inexpensive analog of expanded polystyrene. At the same time thanks to the widest range of unique properties, the area of its application is much wider, than at other heat-insulating materials.

Our material - the cheapest heat-insulating material on the main thing for the consumer to the price quality parameter. In this parameter, taking into account heat conductivity coefficients, it is 1,5 times cheaper than mineral wool, by 1,3 times of glass shtapelny fiber (URSA), at least by 1,5 times of expanded polystyrene, by 6,6 times of extruded expanded polystyrene, by 4,7 times of basalt plates, and by 7 times of polyurethane foam.

Since the beginning of industrial application from 1996 to 2004 the volume of its realization grew by 9 times. The steady 10% an annual gain of its production and application are over the past few years observed. Material is tested for "durability" by the technique developed in common by scientific research institute of a stroyfizik of PAACH and IHF of the Russian Academy of Sciences the operational resource which makes not less than 75 years is established.

Considering low heat conductivity it is recommended to apply it in designs:

It is possible to buy and calculate the price of a penoizol having ordered departure of the expert on object having called us by phones (067) 541-56-81,
(050) 971-94-81, and also previously it is possible to get acquainted with quotations in the section of the prices of warming penoizoly.