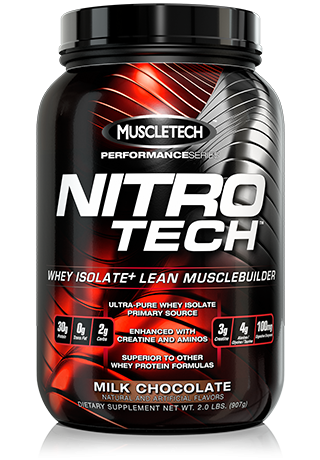 Nitro-Tech® fuel for the pro

Nitro-Tech contains the protein which is generally received from isolate of a serumal protein, one of the purest sources of protein for athletes. Other proteinaceous additives can have only a few grams of this bioavailable and easily usvoyaemy protein.

Ultra pure formula of a protein

Gain more muscular strength, than with a usual protein

Unlike other formulas of a protein which do not contain creatine in general Nitro-Tech contains the scientific checked monohydrate creatine dose. Mix of a serumal protein and creatine in Nitro-Tech as it was proved in research, works many times more effectively for a set of muscle bulk, than usual serumal protein.11

Gain more muscle bulk, than with a usual protein

The researches conducted and published in the scientific magazine showed that athletes who used the main Nitro-Tech ingredients gained 8,8 kg. muscle bulk within 6 weeks, in comparison with other athletes who gained 2,3 kg of muscle bulk accepting usual protein.1