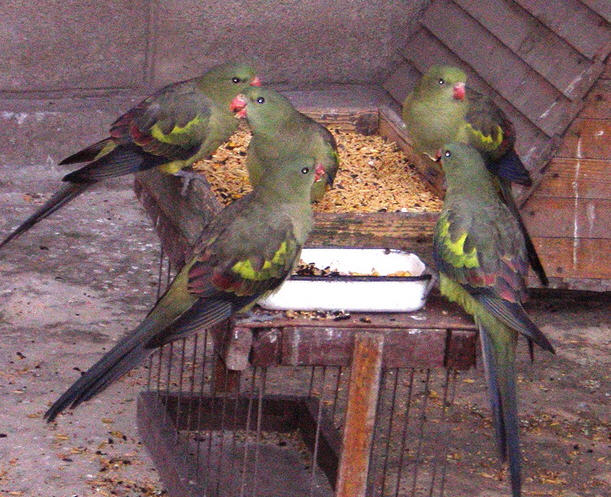 Length of a parrot is 40 cm, a tail about 20 cm. Mountain parrots have accurately expressed sexual dimorphism in coloring. Plumage of a male bright yellow; the back is olive-yellow. Swing and steering feathers black. On a wing there is a cross red strip. The beak is red. Female olive-green, top party of feathers of a tail dark green. The beak is light-red. Young birds on coloring are similar to a female, but at the age of 7 months in plumage of males yellow feathers appear and by 14 — 18 months they are completely painted.

It is widespread in two areas separated among themselves in Australia. And on the behavior both subspecies are not identical. The east Australian population avoids the neighbourhood with the person and keeps in steppes with separate splittings of dense bushes. The West Australian population of a mountain parrot, on the contrary, willingly occupies a cultural landscape and so increased in number that does notable harm to fields of wheat. The mountain parrot eats various small seeds, however willingly eats various small fruits, branches, and also small insects. Arranges nests in hollows of trees, the most part of eucalyptuses, at quite considerable height. Sometimes the distance from an entrance to a hollow to a nest of these birds happens more than 2 — 3 m. If there are no trees, nests in niches among stones or in emptiness of rocks.

Contains in a cage quite often, but approaches as a room bird because of frequent and sharp shout a little.
Mountain parrots feel in spacious the open-air cage better. Mountain parrots belong to unpretentious birds and normally transfer fall of temperature of air to 0 °C at a condition of keeping in big the open-air cage. In small rooms they are boring, inactive, quickly grow fat and do not start withdrawal of posterity. It is necessary to feed mountain parrots with all types of small grain forages.

The open-air cage for successful cultivation of mountain parrots has to have in length not less than 3 — 4 m. For a conclusion of baby birds boxes or duplyanka are necessary deep (1,5 — 2 m); the size of a bottom of 25x25 cm Letok has to have a diameter of 9 cm. In a laying there are from 3 to 6 eggs from which in 21 — 23 days baby birds are brought. They leave a nest at the age of 6 — 7 weeks and at first after a departure are very timid. The Polovozrelost of young growth comes on the third year of life.

We recommend to see
Parrot
Peacocks
Pigeons
To Compare the Products
×