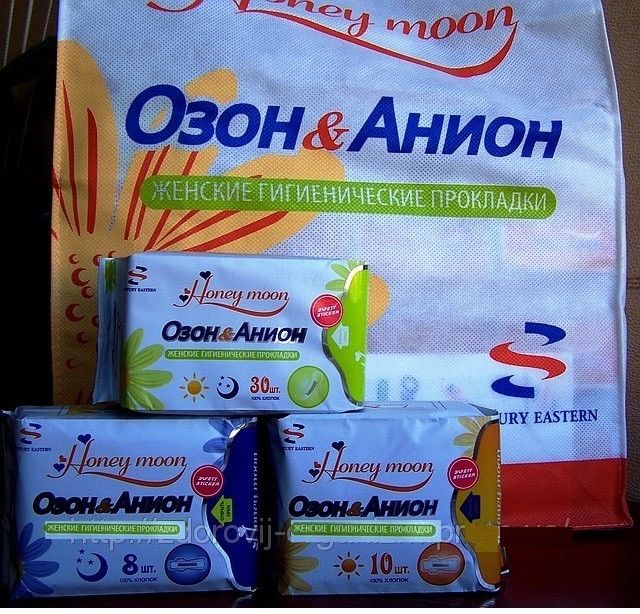 (The price is specified for 1 case)

Packaging of laying is made of the water-proof, preventing education mold possessing antibacterial effect of aluminum foil. From above on packaging there is self-adhesive valve of repeated use which excludes hit in dirt and harmful bacteria. Hygienic laying is made of high-quality cotton, soft and silky, nice on the touch. Laying of "Honey Moon" has good absorb moisture and provide good protection against course.

Gynecologists tell that in the flying most often the patients having diseases which have developed because of misuse of laying address them. It is more correct to choose laying with upper cotton layer which adjoins to skin better, possesses higher air permeability and provides comfortable application. In the period of periods it is necessary to change often laying to prevent reproduction of bacteria and microbes.

Results of the researches conducted by WHO have shown that 80% of women have gynecologic diseases of varying severity. 63% from these diseases are caused by use of low-quality laying. The wet, warm environment is very favorable for reproduction of bacteria: in 15-18 minutes on laying microorganisms begin to breed. Considering that in the period of periods at women immunity is weakened, the risk of development of gynecologic diseases is highest at this time.

During all life the woman spends about 15 thousand laying. But at misuse of laying can work great mischief to health. Some gynecologists even say that hygienic laying is similar to "bombs with microbes" which at "explosion" can cause diseases of varying severity.

The WHO statistics show that 50% of patients with gynecologic problems used low-quality hygienic laying earlier. How to make so that laying did not become "bombs with microbes"? How to women to save the health from the hidden threats?

For production of hygienic laying "ОЗОН&АНИОН" one of the most advanced technologies in the world — technology of the double inside layer of laying containing ozone and anions is used. It promotes effective impact of ozone and anions on skin, increases air permeability, speeds up work of cages, stimulates processes of metabolism and blood circulation. Active oxygen provides good air circulation that promotes destruction of microbes and bacteria, maintains hygiene and increases immunity.

Unique medical laying of preventive action possesses the strong absorbing properties and the increased ability to pass air. Use of this laying will allow to improve metabolism and internal secretion, to increase immunity, to put pressure in order, to destroy bacteria, to lower inflammation, to eliminate unpleasant smells and to get rid of fatigue. Are used in the hygienic purposes, and also for prevention of gynecologic diseases.

You can check condition of the health, compare results before use of laying.

Conduct independently experiment and be convinced. Compare to usual laying

Step 1: Check of moisture absorption and protection against course

Pour out 50 ml of liquid on laying surface, blot with dry napkin its surface. If the napkin remained dry, it means that hygienic laying well adsorbs moisture and provides full protection against course.

Step 2: Check of air permeability of the lower layer

Pour the boiling water in glass, separate the lower layer from laying, cover with it glass. Place other dry glass from above bottom up. Emergence of moisture on walls of upper glass demonstrates after a while that the lower layer of laying possesses good air permeability.

Female hygienic laying with active oxygen and negatively charged ions "Ozone and Anion" will provide you full comfort, will help to support health and will present gentle care and double reliability