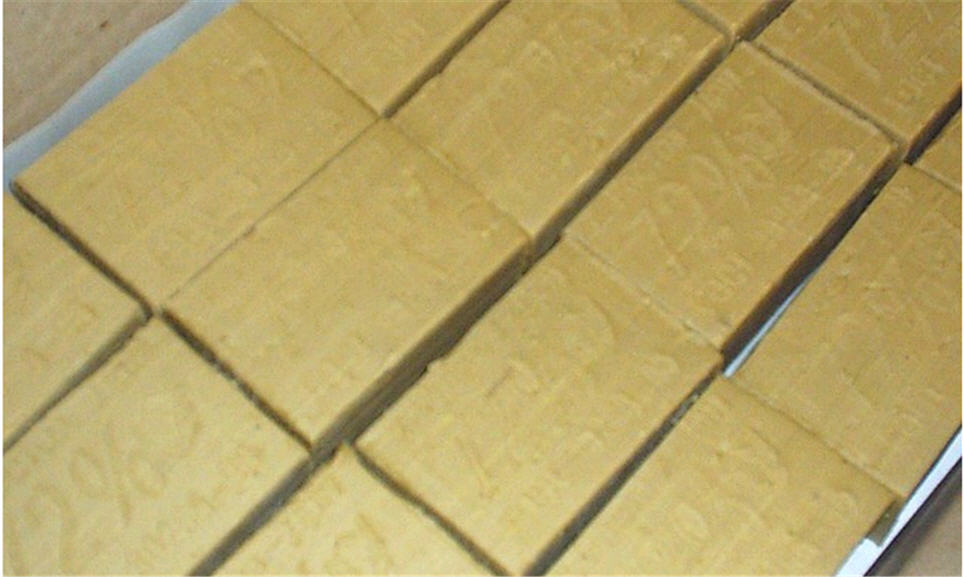 For purchase of goods laundry soap we ask to contact our any manager of the specified contacts. The price and availability, we ask to specify by phone. To

Soap is sodium salt of fatty acids of plant or animal origin. There are three ways of receiving soap base. The most widespread - reaction of direct saponification when molecules of animal or seed fat react with sodium hydroxide, as a result turns out sodium salt and glitserol.

Disputes on the one to whom the mankind is obliged by the invention of soap still are not complete. The Roman scientist and the politician Pliny Sr. claims that else ancient Gauls and Germans knew about soap preparation. There is also giving according to which soap was invented in Ancient Rome: at Romans soap was called sapo - on legend the name has happened from Sapo's mountain where sacrifices to gods were made. Washed away mix from the kindled animal fat and wood ash of sacrificial fire rain in clay soil of the river bank Tiber. The women washing there clothes have paid attention that thanks to this mix the clothes wash off much better. Well and gradually began to use "gift of gods" not only for washing of clothes, but also for washing of body. By the way, the first soap factories too have been found by archeologists in the territory of Ancient Rome, and even more precisely - among ruins of the well - known Pompeii. From the Roman word sapo later at British soap was formed, French have savon, Italians have sapone.


According to the available data, soap similar to modern laundry soap, was produced in ancient Sumer and Babylon (about 2800). Descriptions of manufacturing techniques of soap are found in Mesopotamia on the clay tablets relating approximately by 2200. The Egyptian papyrus of the middle of the second millennium demonstrates B. C. that Egyptians regularly washed with the help of soap. Similar detergents and in Ancient Rome were widely applied.

The legend says that the word soap (soap) has come from the name of the mountain of Sapo in ancient Rome where sacrifices to gods were made. The animal fat which is allocated when burning the victim accumulated and mixed up with wood ash of fire. The received weight was washed away by rain in clay soil of the river bank Tiber where inhabitants washed clothes and, naturally, observation of the person has not missed the fact that thanks to this mix the clothes washed off much easier.

In 1808 the French chemist Michel Eugène Shevryol (1786 — 1889) at the request of owners of cotton - mill has established structure of laundry soap. As a result of the analysis it has turned out that washed - it is sodium salt of the higher fatty (carboxylic) acid. In Europe and the USA continuous process of soap manufacture has appeared in the late thirties together with continuous process of hydrolysis (splitting) of fats water and high pressure steam in soap - producing towers.


The laundry soap is made from natural raw materials of natural origin (animal and seed fats), and also from synthetic fatty acids. Receiving laundry soap is based on saponification reaction — hydrolysis of esters of fatty acids (that is fats) with alkalis as a result of which salts of alkali metals and alcohols are formed.

In special tanks (pulp drier digesters) heated fats saponify caustic alkali (usually the caustic soda). As a result of reaction in pulp drier digesters the homogeneous viscous liquid which is getting denser when cooling — the soap paste consisting of soap and glycerin is formed. Content of fatty acids in the soap received directly from soap paste usually of 40 — 60% . Such product has the name of "paste soap". It is accepted to call way of receiving paste soap "direct method".

"Indirect method" of receiving soap consists in further processing of soap paste which is subjected to salting — processing by electrolytes (lyes or sodium chloride), liquid stratification results: the top coat, or neat soap, contains not less than 60% of fatty acids; lower coat — spent - soap lye, electrolyte solution with high content of glycerin (also contains the contaminating components which were contained in feed stock). The soap received as a result of indirect method carries the name "yadrovy".

The soap premium - pilirovanny, receive at mastication of the dried - up grained soap on rollers of the pilirny car. At the same time in finished product the content of fatty acids increases to 72 - 74% , the structure of soap, its resistance to drying, rancidification and action of high temperatures at storage improves.

When using as alkali of the caustic soda receive hard sodium soap. Soft or even liquid potash soap is formed when the caustic potash is applied.