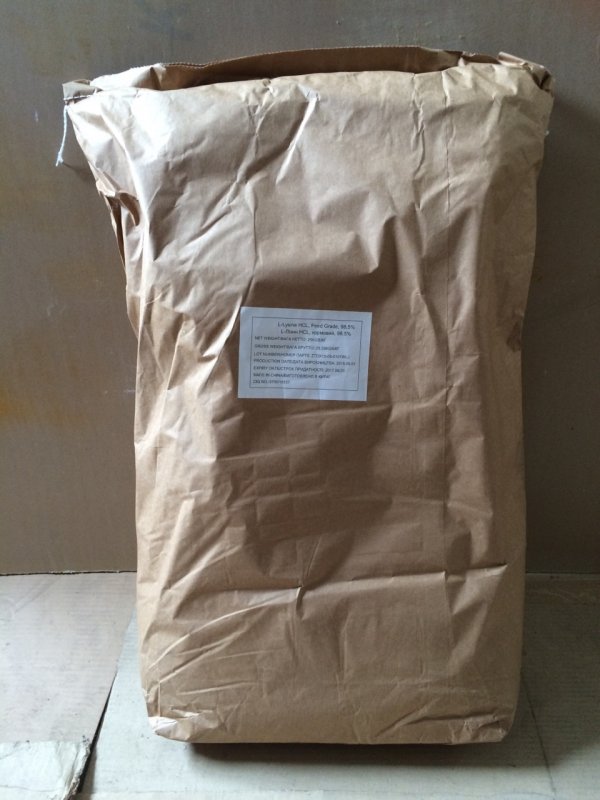 Lysine ― one of irreplaceable amino acids which is applied as feed additive in animal husbandry. Receive it by method of deep cultivation of the microorganisms synthesizing this amino acid.

The main input products for production a lysine and: molasses, corn extract, hydrochloric acid, ammoniac water, vitamins, bran, sunflower meal, fish meal, meat and bone meal and colza. Use of a lysine allows to increase an additional weight of animals and a bird by 10-30%, to increase milk yield of milk for 12%, to increase a yaytsenoskost of hens by 10%.

Lysine a hydrochloride ― the microgranulated loose powder of cream color. Let's well dissolve in water. Treats group of the irreplaceable limiting amino acids. Meets in all proteins, however in vegetable proteins contains in insignificant quantities therefore in sterns it often is not enough. Deficiency of a lysine in an organism arises owing to feeding of animals and a bird the diets consisting mainly of cereals, sunflower meal and insignificant quantity (1-2%) of animal forages. Contains two amino groups and one carboxyl group therefore possesses properties of the basis. Nitrogen 19,16 percent. The lysine is a part of proteins.

It is necessary for animals and a bird for regulation of an exchange of nitrogen, carbohydrates, and also for synthesis of nucleotides, hromoproteid, promotes the intensive growth of young growth, an intensive use of forages, formation of a melaninovy pigment in plumage of birds; influences formation of erythrocytes and adjournment in calcium bones, participates in oxidation-reduction reactions, intensifies reamination and deamination of amino acids, promotes digestion of phosphorus and calcium. The diets which are usually applied in pig-breeding the lysine on importance advances other amino acids in all.

In wheat and barley and corn and sunflower diets practically always does not get a lysine.
Feature of a lysine is its ability to oxidize carbohydrates. This interaction between carbohydrates and amino acid turns a lysine into a complex, inaccessible for assimilation. For increase of availability of amino acids in general and a lysine in particular, especially from bean cultures, they are subjected to thermal treatment. In this regard now rationing of need of a bird for a lysine should be conducted on an available lysine to the norm specified in the corresponding tables.