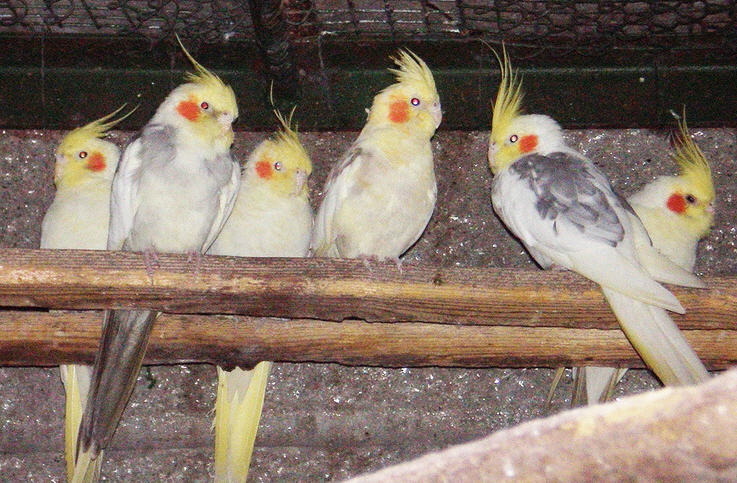 100% of positive reviews from 3
Call
Products of other enterprises
Technical characteristics
Description
Korella or Nympha - Cockatiels (Nymphicus hollandicus) - average parrots.
Earlier was considered that they are the remote relatives of the Cockatoo, but researches showed,
that it is quite independent look. For the first time I. Gmelin described a korella in 1788.
But for the first time D. Gould brought them to Europe. Wild korella - motley birds with gray,
white and yellow spots. In 1846 they began to be parted in Paris.

Soon korella became known across all Europe. Now white are known
versions korell. In our country korella appeared in 1960 and at once won
wide popularity. Length of a body of a korella of 310-330 mm of a wing of 170-180 mm weight 110-120 gr.
The beak of a korella reminds a beak of a cockatoo, but is much weaker, legs with short insteps and
weak fingers, wings long and pointed. Operenye of parrots quite motley and
beautiful. Dark gray-brown color prevails. The female differs from a male in lighter
plumage of top and pale reddish-gray coloring of a bottom. Spots about ears
red-brown, less bright than at a male, moss feathers have on an internal surface
4-5 round pale yellow spots. Young birds are similar to females, however ear
red-brown spots at males brighter. Coloring of adult birds young males
get at the age of 10-12 months. House korella - have generally gray
or white plumage with small white or orange spots on cheeks.

Even wild birds, apparently, rather friendly, it is also possible to approach them close,
before with shouts they disappear in the sky. Residents of Australia, they live in the majority
areas it is close to water, in coastal areas. Korella are sociable and often gather
in the packs sometimes supporting several hundreds of birds lead a nomadic life and packs
fly from place to place in search of food.

The diet wild korell consists generally of fruits for the sake of which they will travel
on huge distances if the food is not enough. The cage of 1000X1000x500 mm is necessary for couple korell. Korella are very undemanding to food, but their diet has to be various: grain mix 2, shredded nuts, the soared oats and corn grains, fresh cottage cheese, grated carrots, the cooked egg, a roll, cookies. Green and juicy forages give in
current of the entire period and in unlimited number, in a cage it is necessary to put
branches of a linden of a mountain ash, birch, cherry.

Korella - accurate and tidy birds like to bathe therefore in a cage the kupalka with water of room temperature has to be put. It is possible to put the moistened branches with foliage in it. Polovozrelymi korella become 10 - 12 months, but it is not necessary to induce them to reproduction of earlier two-year age.
Contact the seller
Korella

We recommend to see
Parrot
Peacocks
Pigeons
To Compare the Products
×