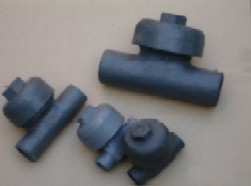 
The principle of action of thermodynamic kondensatootvodchik 45s13nzh (45nzh13nzh) is based on use of kinetic energy of the environment of the different density passing through it. Condensate raises a plate and passes to an exhaust outlet. Steam at receipt with a high speed proceeds in a gap between a plate and the case owing to what pressure under a plate goes down. Because of a difference of pressure over and under a plate it nestles on sealing rings and stops steam pass. Steam over a plate is condensed, pressure over a plate falls and it rises the passing condensate again.

Kondensatootvodchiki 45s13nzh is most acceptable at the price, in a sechetaniye with safety in operation, quality, and also the materials applied at production.

Kondensatootvodchik thermodynamic is delivered complete with the passport of a lot of products of one diameter.

Temperature of a working environment: to 300 o C.

Adjusting situation on the pipeline: vertical cover up.

Kondensatootvodchik consists of details of the case, a cover, a plate and laying.

Stuffing of an epiploon: AGI.

The thermodynamic kondensatootvodchik 45s13nzh is the design of valvate type providing periodic production of condensate in process of its receipt.

Kondensatootvodchik 45s13nzh has one mobile detail - the plate which is freely lying on a saddle. The passing condensate raises a plate and comes out through a diversion channel. At intake of steam having always density, smaller condensate density, the plate nestles on a saddle because high speeds of the expiration of steam create a zone of the lowered pressure under a plate.

As a result the statistical vapor pressure over a plate presses it to a saddle. The plate will open again when under it condensate which has lower temperature arrives, than steam, and will still be cooled in connection with stay under a plate.

Steam which is over the closed plate is cooled by loss of heat both through a kondensatootvodchik cover 45s13nzh, and through the plate blocking condensate pass.

As a result of steam cooling pressure over a plate falls, and condensate pressure she rises, passing it to the final canal.