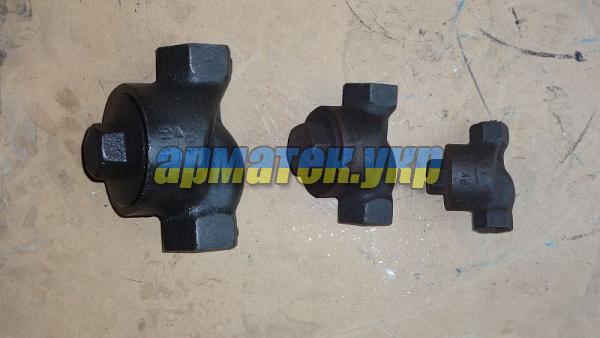 Adjusting situation on the pipeline: vertical cover up.

Kondensatootvodchik consists of details of the case, a cover, a plate and laying.

Stuffing of an epiploon: AGI.

The thermodynamic kondensatootvodchik 45ch12nzh is the design of valvate type providing periodic production of condensate in process of its receipt.

Kondensatootvodchik 45ch12nzh has one mobile detail - the plate which is freely lying on a saddle. The passing condensate raises a plate and comes out through the diversion channel. At intake of steam having always density, smaller condensate density, the plate nestles on a saddle because high speeds of the expiration of steam create a zone of the lowered pressure under a plate.

As a result statistical vapor pressure over a plate presses it to a saddle. The plate will open again when under it condensate which has lower temperature arrives, than steam, and will still be cooled in connection with stay under a plate.

Steam which is over the closed plate is cooled by loss of heat both through a kondensatootvodchik cover 45ch12nzh, and through the plate blocking condensate pass.

- As a result of steam cooling pressure over a plate falls, and condensate pressure she rises, allowing it into the final canal.

The sizes and dimensions - 45ch12nzh