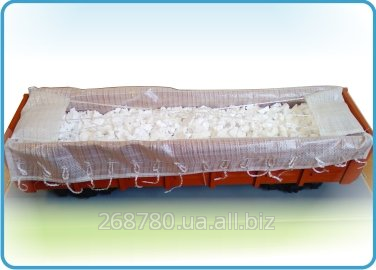 Insert in the car (gondola car)

New type of packing — an insert in open railway cars.

Usually when loading in zhd the car from the consignor is required observance of the following conditions:

Besides, the problem of a rolling stock for transportations of bulk and bulk cargoes has not only quantitative, but also qualitative aspect. From the beginning of a so-called slack season to cover costs of idle times of a rolling stock, both operators, and ZhD allow loading of specialized cars non-core freights. However even after a sink such cars are not in special demand for senders and most often are considered as the compelled sending option.

The present invention is directed to creation of such technologies of shelter of freights in the gondola car which would isolate it from external environment and would localize freight, excluding at the same time chemical reactions of a product with environment, its "natural" decrease in connection with a prosypaniye or blowing. Besides this way of unpacked transportation prevents and complicates unauthorized access to a product from an open body of the gondola car, and also excludes its moistening under the influence of rainfall.
This way is approved and is widely applied by consignors at unpacked transportations of such products as not extinguished lime, sodium silicate (silicate a block), a concentrate mineral ship's biscuits (salt). According to Rules of transportations of dangerous freights by rail, transportation of ammonium nitrate is allowed by gondola sendings in packed form in the covered cars. But because of impossibility of mass transportations of this freight in the covered cars there is a need of its transportation for gondola cars with use of additional resources of safety.
The product is loaded into the gondola car in the specified insert and level a surface before differences no more than 200 mm. Then face elements stack on freight and connect among themselves through the reciprocal tapes sewn to edges. Lateral parts stack on a freight surface with an overlap and connect their edges by consecutive connection of the free ends of the tapes sewn on an edge to the reciprocal loops sewn to the outer side of an opposite lateral element, and free tapes of this lateral element to the reciprocal loops sewn to the outer side of the laid earlier lateral element. Binding make a vnatyazhka, thus excepting possibility of windage.
Unloading of a product is made via the lower thrown-back valves of an insert or by means of a vsparyvaniye of a woven cloth in case of lack of those. Use of this way allows to reduce considerably time of preparation of the car for loading and does not demand cleaning of a product, its after unloading.

Contact the seller
Insert in the car (gondola car)

We recommend to see
Big-bag sacks
Soft transport packaging
Send inquiry
Buy
Contact supplier
Your question has been sent successfully
Consultants of the shop typically answer questions during the day.