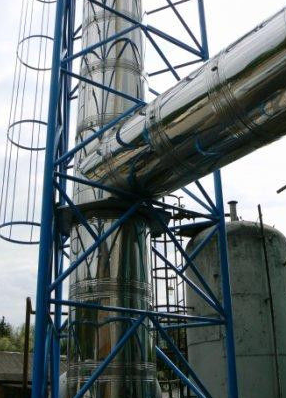 67% of positive reviews from 9
Call
Technical characteristics
Description
Modern gas coppers and columns have rather high efficiency which can reach even 95%! In practice — the efficiency high level directly depends on that, the flue for a gas copper is how correctly designed and mounted!

Temperature of the proceeding gases in modern coppers rather low that is the reason of formation of a large amount of condensate. For reference use: when burning 1 m3 of natural gas it is formed approximately 1.6l. water steam which when cooling passes into a condition of liquid and into condensate on flue walls. At high temperature of combustion gases water steam almost completely is removed from a flue while at low temperatures very hard and it is almost impossible, to warm up the brick channel so to cross the border of temperature of formation of condensate (so-called "dew point").

Condensate becomes the main enemy of brick flues, it quickly destroys their integrity and tightness. Therefore carrying out installation of a flue of a gas copper to brick mine in it surely is established corrosion-proof pipes of a flue! Such option of a design of a flue provides fast warming up of the chimney channel to temperature above than "dew point" and to protect a brick from destructive influence of condensate and the acid environment which is formed at combustion of gas.

If you have no the existing brick mine and do not plan it to build, then in that case you need to establish a flue a sandwich with heat insulation which does not need additional warming. Do not bring one-wall (mono) flues dyal gas coppers to the street at all!
In the lower part of a flue the tee and audit with a kondensatosbornik surely is established — thus, the issue of removal of condensate is resolved, and also there is an access to service of a flue in case of hit in it foreign matters. In case of installation of a vertical flue without turns it is necessary to include in its design a vertical kondensatosbornik.

For formation of good natural draft of a pipe of a flue have to be smooth-bore therefore it is not necessary to establish a corrugated pipe without need, extreme on that, and, in general, it is forbidden to establish an aluminum or galvanized pipe which are calculated only for systems of air ducts for ventilation!

From gas coppers with the closed combustion chamber (so-called turbo coppers) the company of Kominvent makes specialized group of production for the organization of smoke removal — coaxial flues.

Flues for gas coppers from stainless acidproof steel will provide the efficiency high level of your copper and will protect from destructive influence of condensate!