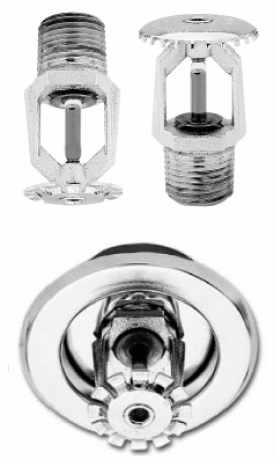 Depending on type of object, its assignment and scale fire extinguishing systems - from autonomous (local) modular powder, aerosol or gas systems, to sprinkler or deluge systems of fire extinguishing of the objects most of different function and complexity can be applied of varying complexity. Systems of internal fire extinguishing (Krankomplekta's Firefighters) which use (or their absence) are regulated by construction norms on sanitary systems also are included in this list.

The problem of these systems one - to extinguish the ignition center found by the fire warning, and here a way of suppression and cost very much differs. At the same time if on small objects it is reasonable to use powder, aerosol or gas suppression (that is specified when determining assignment of rooms), then on big - most economically to use, let expensive at a stage of mounting and adjustment, water fire extinguishing systems which with interest will pay off in use, and God forbid, at fire detection. Besides if the object falls under the requirement of norms of installation of fire cocks, then it is far easier to organize also automatic water fire extinguishing here. In general the fire extinguishing system is multilayer system of a uniform complex with interaction through systems of automatic equipment with the fire warning, the notification, smoke removal.
One of basic elements of a fire extinguishing system - sprinklers. Drencher or sprinkler sprinklers are used in such systems. The first are cheaper, but as they say pour water everywhere as are constructed by the principle of sukhotrubny networks and sprayers of water in constantly open state. The second are dearer, but also work only over the ignition center as are closed by the thermal lock.
Except the given systems, today the company can carry out delivery and design of fire extinguishing systems with sprayed water.

You call, order design, mounting and service of fire extinguishing systems for the most reasonable prices.