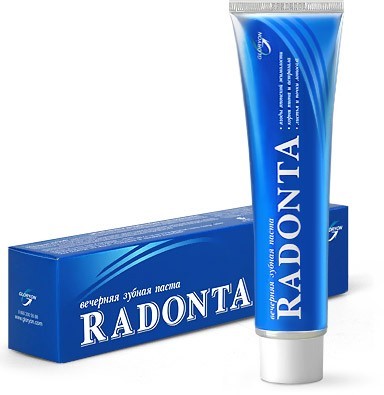 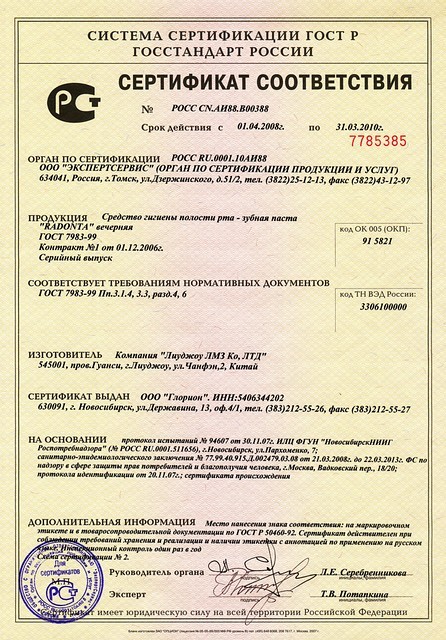 Evening Radonta toothpaste
Natural extracts of curative plants which since ancient times were used in the Chinese medicine for treatment and prevention of diseases of oral cavity are part of Radonta paste:

The root of the Chinese peony is used not one millennium at toothache, the increased fragility of teeth and at inflammation of gums.

Modern scientific researches demonstrate that extract of root of the Chinese peony:

* Contains the whole complex of the microelements necessary for creation of tooth enamel and dentine: calcium, phosphorus, silicon, lanthanum, fluorine, manganese;
* Possesses unique anti-inflammatory properties, warning the majority of diseases of mouth thanks to high content of natural salicylates — one of the strongest anti-inflammatory and anesthetizing substances which render more expressed and long effect, without causing at the same time collateral reactions;
* Has the calming effect, promotes healthy sleep.

* Softly recovers balance of natural microflora of oral cavity and has antiviral effect;
* Has anti-inflammatory effect;
* Contains large number routine and other bioflavonoids, and also natural vitamin C which promote strengthening of vascular wall of blood capillaries mucous and to prevention of the raised bleeding of gums;
* Has the long deodorizing effect.

The milk vetch since ancient times is applied as magnificent wound healing, all-strengthening and tonic.

* the milk vetch renders Especially strong effect at prevention and treatment of such diseases as gingivostomatit also periodontal disease;
* Promotes strengthening of gums, enamel of teeth and their roots;
* Protects oral cavity from viral infections.

Lotus — sacred plant in Asia to which the set of civilizations for its magnificent salutary properties worshipped. It has the soft healing, anti-inflammatory and antibacterial effect.

The Radonta toothpaste will present you healthy sleep and will carefully care for your teeth, even when you sleep.
Structure