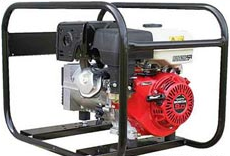 About the producer of Europower

The Europower Generators company was created in 1989 in the province Limburg of the federal Kingdom of Belgium. Today the enterprise occupies floor spaces in 6500 square meters in the territory of more than 20 thousand square meters in the city of Niuverkerken. In 1994 the Europower Generators company received the certificate of the quality standard of the International Organization for Standardization of ISO9001, having become thus the Europe's first producer of power plants of low power the certificate possessing it.

Europower Generators makes the petrol and diesel power plants equipped with reliable Japanese and European engines Honda, Yanmar, Hatz, Briggs&Stratton. Europower generators are made with power from 1 to 40 kW in the opened and closed (shumozashchishchenny) execution. In a line there are invertor petrol generators, petrol genertor of low and average power, diesel generators of low and average power, and also welding petrolgenerators. Single-phase and three-phase models of generators are presented.