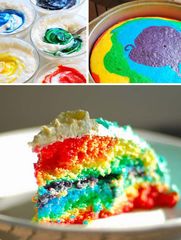 Leaves and stalks of plant of indigo (Indigofera tinctoria) which is grown up in India, Africa, America contain 0,2-0,4% of indigotin.
Receiving

Dye is generally emitted with stake.
Hygienic norms
Application
The water soluble color is applied one or in mix with other dyes to coloring of confectionery, liqueurs, desserts, ice cream, etc. The dosage for different products makes 0,01-0,5 g/kg. Mixing with yellow dyes (E102, E104) it is possible to receive green, with red (E122, E123, E124, E129) - violet, with yellow, red and orange (E110) - dyes from brown to black. The shade of aluminum varnish can be changed in the same way, mixing it with varnishes of the above-named dyes. It is used first of all for coloring of dragee.

Dyes. Color of foodstuff has huge value for the consumer: it not only indicator of freshness and quality of product, but also necessary characteristic of its recognition. The dyes which are present at it are responsible for color of product. They can contain in it naturally (beet, carrots, vitellus, etc.) or can be added in the course of processing. Dyes recover the natural coloring lost in processing and storages; increase intensity of natural coloring; paint colourless products, for example soft drinks, giving them attractive look and color variety. Dyes divide on organic and inorganic; on giro - water-soluble and pigments (insoluble neither in water, nor in fat). The painted foodstuff is not considered as dyes (tomato and other juice, spinach, ground dry beet, carrots, etc.).