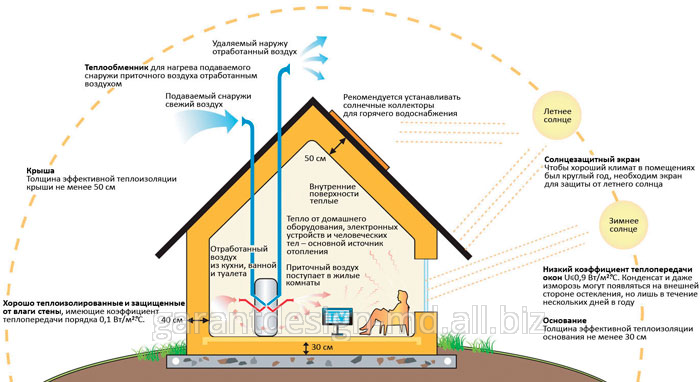 Reconfirm the price with seller
Call
Seller
KAMELEON
Moldova, Chişinău
(View map)
+373
Display phones
10
10 years on Allbiz
Description
Design of passive houses to Chisinau Moldova!
Passive houses are the well isolated buildings, annual thermal loading
which so low that standard heating system it is possible
to exclude. Small amount of required heat can be transferred in
certain rooms by heating of the air arriving through ventilating
system. It works when the need for heating of rooms makes to 15
kW-ch/m2a (kilowatt hour on square meter of living/useful area a year).
The design of the passive house is very exacting concerning functioning
the used building components. The following reference values are applicable
to climate of the Central Europe. These principles are valid as well in others
climates.

It is not enough simple combination of suitable components for construction
the passive house - the integration sum in general is more, than the sum of separate parts.

Interaction of components creates need of the integral plan to reach the Standard of passive houses. It is also the purpose Paqueta of planning
passive houses.

To Compare the Products
×