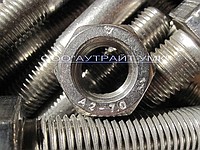 In stock
Price:
1 UAH
Zevs, OOO
Ukraine, Kharkov
(View map)
Call
Products of other enterprises
Description
Threaded connections are widespread in mechanical engineering (in the majority of modern cars over 60 all details have a carving). On operational appointment distinguish carvings of the general application and special. Intended for connection of one type of details of a certain mechanism.

Carvings of the general application:
Fixing - metric, inch, applied to demountable connection of details of cars the main requirement to which - to provide durability of connections and to keep density (not disclosure) of a joint in the course of long operation;
Kinematic - trapezoidal and rectangular, applied to running screws, screws of supports and tables of measuring devices, etc., the main requirement to which - to provide exact movement at the smallest friction and persistent - for transformation of a rotary motion in rectilinear in pressa and jacks the main requirement to which - to provide smoothness of rotation and high load ability.
Pipe and reinforcing carvings - pipe cylindrical (ST of SEV 7-72) and conic (ST of SEV 8-72), conic metric (ST of SEV 304-76), applied to pipelines and fittings of various appointment the main requirement to which to provide tightness of connections.
Carving parameters. The cylindrical carving is defined by a profile, average d2 (D2), external d (D) and internal d1 (D1) diameters, P step (and the Pn codes = Pn for a mnogozakhodny carving), a profile corner α, height of an initial profile (an initial triangle) of H, tilt angles of the parties of a profile β and γ, a carving angle of lead, and also screwing together length ℓ.
The experiments made in the USSR and abroad showed that threaded connections with the ISO profile differ in the increased durability in comparison with the connections having smaller cuts of a profile of a carving.
At the ISO profile formation of an external carving by a nakatyvaniye and a female thread cutting is also facilitated. The metric carving at static loadings has a self-retardation stock.
The form of a hollow of an external carving is not regulated and can be carried out as to a ploskosrezanny form of a hollow of an external carving the real profile of a hollow has to settle down between lines of a flat cut at distance of H/4 and H/8 from top of an initial triangle and be in a zone 2. At the rounded-off form of a hollow of a carving which is preferable the radius of curvature in one point should not be less than 0,1P, and its profile has to be between top 3 and the lower 4 limit profiles. At high requirements to durability of a carving it is allowed to establish Rmin=0.125P. The form of a hollow of a carving of a nut is not regulated.
The hollow form external carvings influences cyclic durability. The smallest cyclic durability bolts with a flat hollow of a profile have, the greatest - with the hollow outlined with a radius of R= H/4=0,216P. The specified dependence of cyclic durability on radius was confirmed for the threaded connections with a tightness made of the titan and heat resisting materials. Radius of R is applied at big variable loadings.
Contact the seller
Cylindrical threaded connections