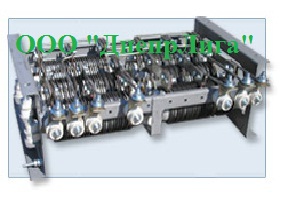 Crane blocks of resistors of the fekhralevy BR6F U2 type

Crane blocks of resistors of the fekhralevy BR6F U2 type from the producer.

Crane blocks of the resistors of the fekhralevy BR6F U2 type intended for start, braking, and also regulations of speed of the electric motors of current working in electric drives of load-lifting cranes.

Blocks of resistors have the copper conclusions which passed electrochemical tinning thanks to what differ in the longest term of operation, and also are not subject to corrosion.

Interpretation of the symbol BR6F:

BR - the block of resistors;
Ф - production material (fekhralevy tape);
6 - the maximum number of resistors on the block.

BR6F U2 needs to be operated in the following conditions:

Besides, blocks of U2 resistors need to be placed in rooms (casings) or under canopies which are capable to protect them from direct influence of solar radiation, and also rainfall.

Use of crane blocks of resistors is inadmissible for achievement of the foreign purposes as each of blocks is intended for specific resistors. BR6F U2 have the open construction on security, and also are characterized by ambient cooling.

We recommend to see
Block brakes for industrial use
Shoe brakes for cranes
Units of resistors for cranes
Send inquiry
Buy
Contact supplier
Your question has been sent successfully
Consultants of the shop typically answer questions during the day.