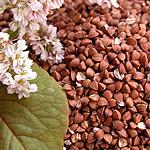 For the first time the corn began to be cultivated in the South and Central America. During pre-Columbian era Indians have achieved concerning good results in its cultivation, all main types of corn have appeared: siliceous, toothlike, starchy, sugar and bursting. Indians used in food not only grains of corn, but also whisk, and stalks. From pollen they cooked soup, used as stuffing for pies. In Europe the corn began to be cultivated only in the 19th century, and in Russia is even later.

Now the corn is cultivated in 60 countries. Precisely nobody knows from where at corn such name. In Romanian "кукуруз" "fir cone" means. In Turkish "кокороз" is "corn stalk". So the word "corn" has come to us either from Romanians, or from Turks. But in many countries corn call "maize". Cornmeal mush best of all brings pesticides out of organism. Corn grits - valuable nutritive product. Cornmeal mush is still known as hominy - low-calorie porridge which is capable to bring fat and pesticides out of organism.

Corn grits belongs to digestible products. Porridge from corn possesses feature to suppress putrefactive processes in intestines due to maintenance in it food fibers.